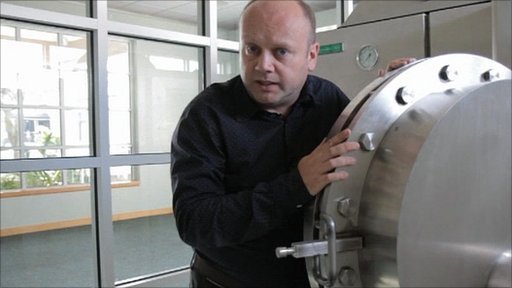 There are a few alternatives to burial and cremation, but let us stick with the ones that are in the same arena. Promession ever heard of it? When I say arena I mean in the sense you get an ash like residual to bury. However it is at the opposite end of the spectrum in terms of technique. It was developed in Sweden is fairly simple instead of cremating the body using heat, instead they freeze the body and put it in liquid nitrogen, it then vibrated which causes it become powder. Then the water and metals (eg fillings) are removed.

The company operating the process in the UK are called Promessa and they very much extol the virtues in terms of compost – which is great but … The other interesting point is about being as they put it ‘preservation after death in an organic form’ which I guess means you get the whole person back minus the water content – which is most of what we are made up of.

I think it is one consideration, it makes sense, but the problem with the majority of us is the whole issue is wrapped up in emotion and mental perception and as such techniques have little basis in our psyche, more sci-fi the psyche if you pardon the pun. Nether the less, in a principally secular country that has more of the more progressive view about death than most it should not be dismissed out of hand…

3 thoughts on “Promession the alternative to cremation?”