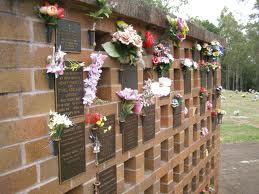 A columbarium is a wall with cavities designed to hold cremation urns or cinerary urns. Have look at the picture above, they are usually made of stone such as granite and each niche can hold a number of cremation urns (up to about 4). The niche faceplate usually has an inscription engraved upon it.

These are quite popular in the Europe and US but not so in UK, so:

The name comes from the Latin for Dove as the niche resembles a dovecote where doves build their nest. It has gone on to mean a sepulchre for urns. They date as far back as Roman times (eg Columbarium of Pomponius Hylas) and maybe even further.

There are some examples in the UK, most notably the Dukes and Duchesses of Buckinghamshire. They constructed a family Columbarium in Wotton in Buckinghamshire which appears to ape fashions from the continent and may relate to the change in the royal lineage as the Hanoverians had become the new dynasty, the percentage of people in the UK at the time being cremated was very small indeed.

But what psychological need do they fulfil that burying, keeping or scattering ashes does not (or at least not to the same extent).

Well I suppose it might be a case of continuing traditions; ‘my mum and dad are in one, so what is good enough for them is good enough for me’.  Maybe it is for people who believe ashes should be in a place that is specifically designed for the purpose, or that the deceased should be kept with others who have departed, a necropolis if you will. If that is the case it might make more sense than burying ashes.

Historically burying was ‘necessary’ if you don’t opt to cremate, but there is no need for ashes to be buried. You may feel you wish to keep the ashes at the cemetery or church and not want to scatter them in the garden of remembrance, thus a columbarium is a great choice. Placing the urn in a wall or columbarium means you can visit, connect directly with them, more like visiting a grave.

Perhaps we should have this as an option more widely available in the UK; after all we are big fans of bronze plaques at crematoria as a focal point of memorialisation. According to the Co-op’s survey 1 in 20 chose the crematoria as the last resting place, personally I think this figure seems a bit low, maybe this is likely in the future, but currently from our research I would think it was more likely around 1 in 10. Interestingly it would appear that there may be a very slight increase in their use, not so much at the crematoria but some churches like the idea that these could provide a good option particularly where space is limited, and also as an income stream.

So to the cost, they are not cheap. I can’t say my research is massively in-depth, but I did look at a number of columbarium in a range of locations and what I can say is that, as with most things, cost has a lot to do with location: inside a fine old church in London with a lot of history – pricey, outside in the grounds of a crematoria in Northern England not as pricey (but still not cheap).

Do be aware that absolutely everything has a price; the inscription, the vault opening and so on. A rough estimate of set up costs is around £400- £500 (although there big variance here). Nearly all options are on a lease basis, so you have the ongoing annual cost, not insignificant either.  From Fleetwood in Lancashire where the price is about £15 per year to £150 per year in St Bartholomew the Great, West Smithfield, London.

For more information on Columbarium

Despite the cost, the more I read about them the more I quite like them; I can see that they have a role particularly for a couple where one has departed first or maybe for children who are waiting to decide what to do with the ashes of their parents. They are not a permanent solution for most of us, due to leasing arrangement. However they certainly seem better than a brass plaque (which I personally don’t understand).

Perhaps we need to come up with a more considered or up-to-date version of a columbarium. How about one for those in the trade union movement in the style of those wonderfully symbolical early banners, or maybe for more creative souls a moving one like kinetic art so you become part of an installation … the next Turner Prize? Maybe one carved out of living rock (as a once-upon-a-time geologist I prefer in-situ rock) like a cliff face. I certainly think that parish churches could consider getting a local artist or sculptor to make one, that way they could save space and create an income stream… Ummmm what a world of possibilities there is for the modern columbarium! 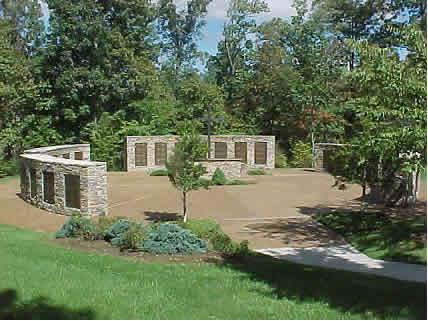 14 thoughts on “Keeping ashes in a Columbarium: what are they, why use them and what do they cost.”