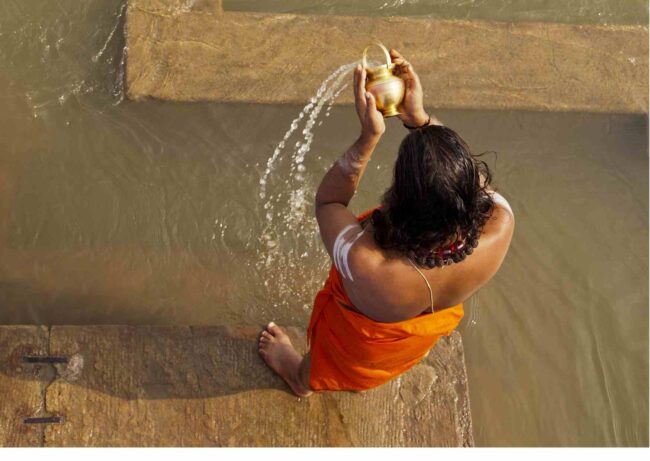 The river Ganges and cremation are intrinsic parts to the Hindu religion. Hinduism has spread across the globe and not all worshipers can have have their ashes spread over the Ganges. In Britain those of a Hindu faith may adopt a local river for the purpose, popular locations are Leicester, Kingston, Windsor

However, some followers would prefer to have their ashes returned to India to have their ashes scattered on their holiest of rivers. We have come across a company that offer a service of taking back the cremated ashes – Sacred Rites of the Ganges where they can a arrange the Asthi Visarjan Ceremony to be performed .  They explain the significance thus – “Cremation is an important part of our view of destiny, embracing a symbolic form of the human embryo, which began with the male seed developing into bones and the female blood resulting in flesh.  At the end of one’s life a reversal takes place as the heat of the funeral pyre divides flesh from bones. The flames of the cremation fire are the means by which the human form, or body, is presented to the gods as a last sacrifice. The spirit is released from the body for its journey, shaped by the individual’s good (or karma) during his or her life.

Hindus from other parts of the world have scattered cremated remains (cremains) in local rivers, however, through the services provided by , it is now possible to perform these important ceremonies in the proper fashion by having your loved one’s cremains sent to Varanasi, India, for a traditional Asthi Visarjan ceremony and Scattering of Ashes in Mother Ganges.”