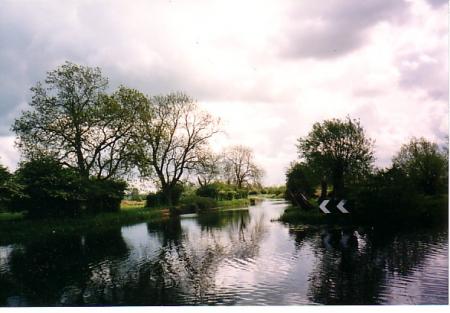 Hindus and Sikhs scattering their ashes on the river of Britain is not a new phenomena, the practicalities for many of taking a loved ones ashes back to the Ganges can prove too great. So many have adopted local rivers where the ashes can be scattered on the flowing water. The more popular spots tend to be based near the larger Hindu and Sikh populations, in fact the river Soar in Leicestershire has been popular for some time. However, what I was not aware of until recently is that the river had been blessed by a Hindu priest  who anointed it with water from the holy Ganges river.

Shastriji Prakashbhai Pandya, a Hindu priest who officiates at such ceremonies, claimed that the Soar was an acceptable alternative. “When I close my eyes, this could be the Ganges,” he said. Well I a not sure my imagination is quite that good, here the ashes are scattered at a tranquil spot where the River Soar meets the River Wreake, which is likely be fairly contrasting to the scared city of Varanasi with is heat, tumult and the smouldering of pyres.

However, Mr Pandya, who previously presided at Ganges ceremonies before coming to coming to the UK went onto say “Often it is difficult for people to go to India to scatter the ashes,” he said. “It is expensive, and older family members may not be able to travel. That is one reason why people are coming here.”

“The second reason is, the Soar is greener than the Ganges, and the scenery is better. Unlike the Ganges it is quiet here, and the water is clean and clear. Instead of people living along on the riverbanks, there are ducks.”

Families can hire a boat to take them down river to hold a ceremony. And scatter the ashes, along with flowers, powder, tulsi grass and holy leaves.

As for the Great British weather, well that is not a problem if it starts raining immediately after the ceremony, that means good luck…

As to why water from the Ganges was needed to anoint the river Soar was anointed well – it is because the Ganges is a goddess who will carry the ashes to the sea, symbolising the passage from one life to the next and if the Ganges (or in this case a credible substitute) is used their next life will be better, so the Soar now becomes a surrogate.

The River Soar is one of a number UK destination for Hindu and Sikh ashes. Other popular choices are the Thames, the Severn and the Mersey.

For more information on how to book the boat service go to River Soar Boat Hire.