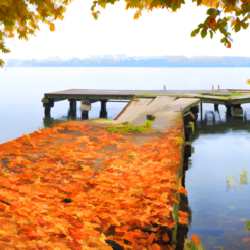 There has been a survey of people ash scattering preferences and the following is the main content of a press release from insurance provider British Seniors Insurance Agency:

[They] looked into the weird and wonderful places that people want their ashes scattered once they die.  New research has revealed over half (55%) of the UK want to be cremated when they die with only 22% choosing to be buried and 20% unsure. It seems that many Britons already know exactly where they want to be laid to rest despite only 21% of them having some form of life cover in place to cover the costs of their funeral.

British Seniors Insurance Agency asked consumers where they would like their ashes scattered and the responses ranged from the very sentimental to the downright unusual. The most popular spots are: at sea; with a loved one; in a graveyard; in a favourite beauty spot; or in their garden.

One of the top places on the nation’s list were their favourite football grounds with venues up and down the country being the most popular selected resting spots including Stamford Bridge, Old Trafford, the Emirates Stadium, Loftus Road, Hull City, Elland Road, Anfield, Celtic Park, Ibrox, Dorchester Town FC, Villa Park, all listed as spots where footie fans would like their ashes scattered.

And it seems that UK adults are an intrepid bunch with many wishing for their ashes to make a final journey to far-flung corners of the world with Las Vegas, the Maldives, Canada and the Ganges among popular destinations.

However when delving into the stranger places people would like to be left, British Seniors Insurance Agency found the following:

Whilst this was presumably done to generate interest in their insurance company it does reinforce many issues we talk about on the site: the favourite places to be scattered; the popularity of water as a final destination; peoples obsession with football; and more anarchic options – all part of the UK’s interplay with dark humour and funerals.