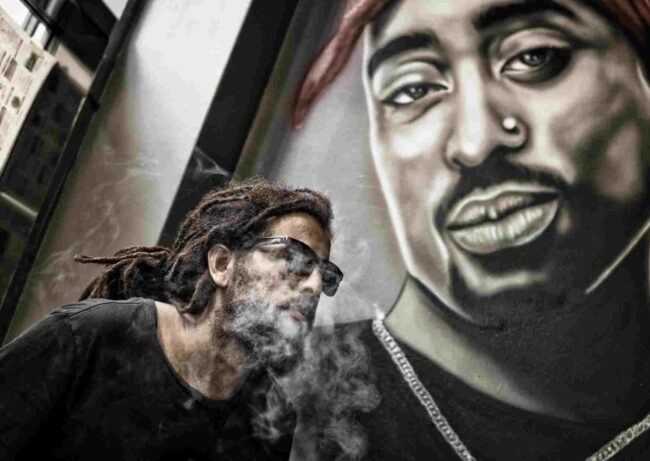 The Iconic rap star Tupac Shakur, who died in 1996 after being shot was memorialised in a rather unique way. Members of rap group Outlawz, admitted recently that they did indeed smoke the Tupac’s ashes on the day of his memorial service .

The memorial service was held on a beach, and the rappers friends and co-stars joined together to smoked the stars the cremated ashes. They apparently put his ashes in a joint and smoked it/him. Speaking in an interview with Vlad TV, fellow rapper Young Noble told how they remembered their lost friend.

“Yes, it’s definitely true,” said Noble. “[We] had a little memorial for him with his mum and his family. We had hit the beach, threw a lot of shit he liked at the beach. Some weed, some chicken wings, he loved orange soda… Pac loved that kind of shit, so we were giving him our own farewell.”

EDI Mean, another member of the Outlawz gang, also claimed that the ashes idea was taken from one of his songs.

“I came up with that shit. If you listen to ‘Black Jesus’ it says, ‘Last wishes, niggas smoke my ashes’. That was a request that he had. Now, how serious he was about it? We took it serious.”

Rather original one has to say and incredibly symbolic. My only comment would be the practicality – the ashes are what is left after the body has been cremated at high temperature – the ashes are the part which could not be combusted  -therefore the ashes would fall with the ash so to speak!