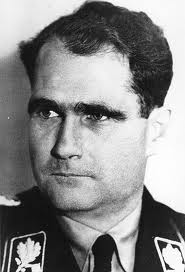 Rudolf Hess the one time deputy to Adolf Hitler has had is body exhumed, cremated and his ashes scattered at sea.

In Germany, the cemetery in the Bavarian town of Wunsiedel was becoming a centre of memorialisation for Hess and Nazism more widely. Fascists had held a yearly demonstration at the grave on the anniversary of his death on August 17, raising their hands in the Nazi salute and laying wreaths on his gravestone.  So the Authorities answer was to remove Hess from his last resting place, cremating him and putting his remains in the sea – thus decoupling the place from the man and removing a focal point for memorialisation.

The same technique, to subdue memorialisation, was used with Osama Bin Laden’s remains earlier in the year. Interesting that they considered the sea, with its universality and distinct lack of ‘landmarks’ it would seem to make an ideal place to prevent focus around a point. However this theory is not always correct in fact paradoxically the reverse is happening at the same time with more and more people choosing to scatter ashes at sea. And in these cases I can’t imagine for one minute that those going to the trouble of hiring a boat and taking the ashes out to sea are doing so because they want to remember their loved one any less. So what is it about water and the sea specifically that create this dichotomy, I like to think those who are doing it for a positive reason are choosing so because of the characteristics around connectivity of water and it is ubiquitous nature, sort of – it is everywhere so that person is everywhere with me. For one who has had a long time love of the sea it does something (to me) that contemplation of no other medium or vista can do.

One final point is that some companies offering a scattering at sea service will present their customer with a certificate of the actual location, recorded by coordinates from a GPS system.