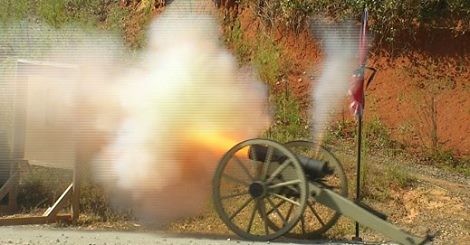 Now this is on the unusual side, a long time firearms enthusiast has had his ashes blasted out of a replica US civil war cannon. Now that is a proper send-off!

He had mentioned to his son Garris that he thought having his cremation ashes fired out of a cannon would be a fitting exit, Garris then went to arrange the ceremony.

So on a cool September morning family and friends gathered for the occassion. It began when a cannoner wearing a black arm band approached the cannon, which stood next to a Confederate flag. Then in accordance with Civil War tradition, the cannoner took down the flag and placed his arm band around it, to signify that it would not fly again for the rest of the day.

The gunner then readied the cannon for firing and lit the fuse. The roar that followed rocked the heavy iron gun, leaving smoke a ringing in the ears.

A sombre moment that was met with a mixture of cheers, tears and applause.

I like this – a unique and distinctive send-off. I was only left with one question, what is practical shooting? Is there impractical or reckless shooting clubs, actually scratch that, I don’t want to know – it scares me!!

5 thoughts on “A send-off with a bang! Memorialised though a cannon blast”