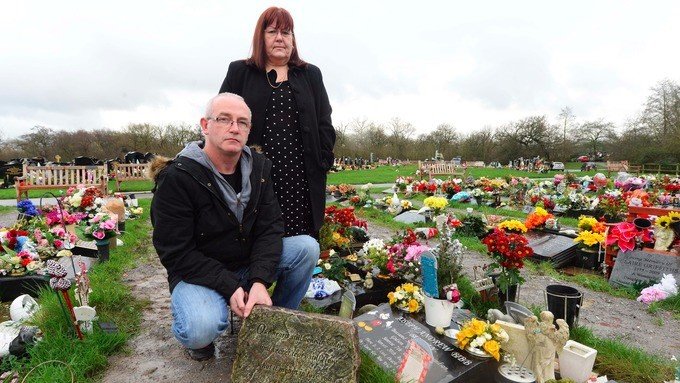 Darren Bibb is angry with Solihull Council: accusing them of grave robbing!  Mr Bibb’s disabled son passed away just after his 18th birthday in 2011, and the family decided to place a stone memorial over where his ashes are buried on the grass and adjacent to the headstone. But the council has removed the memorial stone.

Mr Bibb said: ‘Joseph’s ashes are actually placed just in front of the headstone, which is effectively a walkway. So to stop people stepping on where the ashes had been placed, we placed a commemorative stone there. We did not want people stepping all over him. It is also extremely muddy there and this stone also allows us to tend to the grave.

It’s just disgusting that someone can be allowed to come along, remove treasured possessions and just dump them. I know it sounds extreme, but they are like grave robbers.”

The council has removed a large number of items from the burial site, which has upset a number of families. They have not thrown the items away, but gathered them and stored them in plastic boxes which many think has not been done in a respectful way.

Solihull Council said: “regulations do not permit the placing of items on the grassed area.

We realise this is a very sensitive issue and try to balance the needs and wishes of all users of our cemeteries. However, regulations do not permit the placing of items on the grassed area of cremated remains plots as it can cause problems with access to graves for other visitors and affect the standards of grounds maintenance.

As there were increasing numbers of items being left in such a way at Woodlands Cemetery which was causing problems for other visitors, users were notified in August that any items in these grassed areas would need to be removed by 31 October 2015. Any items left after this date would be removed and stored on site.

If visitors are unsure whether an item they wish to place is permitted, we ask that they contact the cemetery for further guidance before placing the item on the grave.”

This is another case of a monolithic authority going about it business, doing what it needed to do but in the wrong way. And relatives not necessarily understanding the wider needs of the Authority. People’s loved one’s resting places is one of the most sensitive areas, and Councils need to be ultra-sensitive on this area, not just in their rhetoric but in their deeds too.

For me there is a number of difficult and perhaps unavoidable differences. The rise and rise of personal site memorialsation – no longer is there just flowers, there are photos and all sorts of keepsake left at the graveside, and this makes grounds maintenance very difficult. In addition the lack of space in many urban cemeteries means that remains are packed in very tightly as we can see here, the net results is that people access a plot via a muddy path which actually goes over the top of where the ashes are interred. 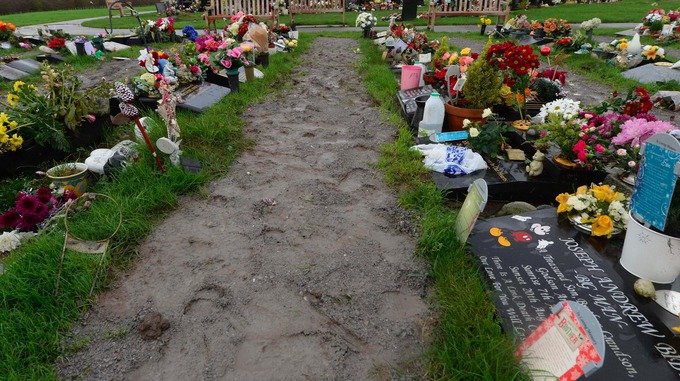 Sadly, if everybody did as Mr Bibb did there would be no access for others wishing to memorialise their relatives. However, the council in writing a letter, no matter how are ‘right’ they were according to the rules they should consider that this was always likely to incense people.

I would suggest two things, one make cemeteries less packed in even if means there are less places, as this to me does not look dignified (although I doubt everyone would agree). Secondly, that council officers dealing with the bereaved (even those arms-length) are equipped to do this: whether an awareness raising run through a bereavement organisation or perhaps opportunities to meet families and understand how they feel.