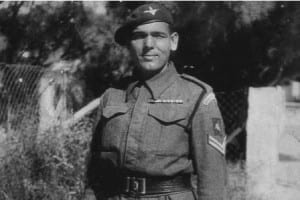 Hull’s 299 Parachute Squadron Royal Engineers Parachuted into Arnhem and scatter the ashes of a former member over the DZ.

Members of Hull based 299 Parachute Squadron Royal Engineers have just returned from Arnhem in Holland after taking part in a yearly remembrance parade. Code named Operation Market Garden (17-25 September 1944) was an Allied military operation, fought in the Netherlands and Germany in the Second World War. It was the largest airborne operation up to that time.

The operation required the seizure of bridges across the Maas (Meuse River) and two arms of the Rhine, as well as several smaller canals and tributaries. Crossing the Lower Rhine would allow the Allies to outflank the Siegfried Line and encircle the Ruhr, Germany’s industrial heartland. It made large-scale use of airborne forces, whose tactical objectives were to secure a series of bridges over the main rivers of the German-occupied Netherlands and allow a rapid advance by armored units into Northern Germany.

This year was slightly different as the Officer Commanding 299 Para Sqn RE (Major Christopher Wilcock) was approached by Mrs Joan Venus Evans who asked if we could scatter her dad’s ashes (Ernest Henry Venus) on the Drop Zone, Ginkel Heath in Arnhem.

Ernest Henry Venus joined the Army on 10th February 1940 into the East Yorkshire Regiment. He later volunteered to serve with the Parachute Regiment and qualified as a military parachutist in December 1941. After leaving the regular Army he found that he missed the Army lifestyle and in particular parachuting so he joined 299 Parachute Squadron Royal Engineers based at calvert lane, Hull. He served with the squadron until the late 1960’s. Ernest passed away on 29 March 2011.

Major Wilcock asked the Hull Troop if anyone would like to volunteer to parachute with the ashes and L/Cpl Chris Duggan accepted the offer. It was an incredible experience for me he said.

2 thoughts on “Scattered over Arnhem”