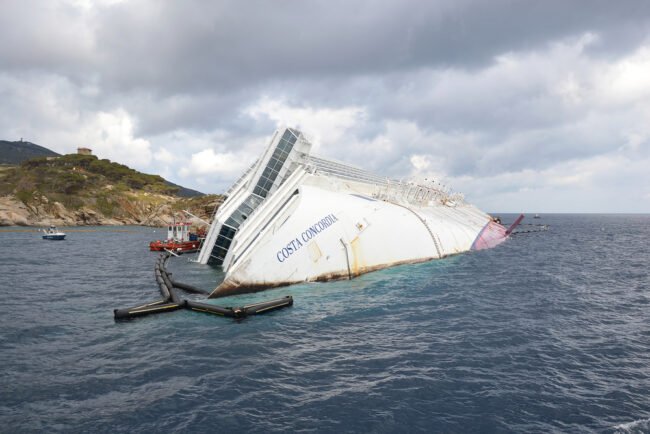 Sandra Rodgers thought she was going on a lovely Mediterranean cruise with her daughter and granddaughters, where she had planned to scatter the ashes of her late husband Barry at Monaco.

Little did she know she would end up in a “completely chaotic” rush to escape the stricken cruise ship.

It sounds like an ordeal that no one should have to endure, she describes scenes of complete chaos “There was certainly no ‘women and children first’ policy. It was disgusting.” Mrs Rogers said: “I lost my daughter and my grandchildren in the chaos whilst we were being told by the crew that there was a simply a technical problem…We were also told by crew that we should go back to our cabin. Thank God we didn’t do as they had told us as we may not have made it off the ship alive”

“I was standing by the lifeboats and men were banging into me and knocking the girls.” Many of crew just abandoned ship and it was the islanders who came to the rescue, I should caveat this by saying there were also plenty of crew who did stay by there posts and did sterling work in the evacuation.

Sadly, in the escape she ended up losing the cremation urn with her husband’s ashes and other precious family items, she told reporters that she has engaged travel law experts Irwin Mitchell’s, to act for her.

Mrs Rogers said she and her daughter had decided go on the cruise following the loss of her husband and father last year. “We had planned to scatter Barry’s ashes when the cruise passed Monaco, because Barry had always wanted to see the Monaco Grand Prix,” she said. “It’s dreadful but his ashes were lost on board the Concordia as well as other family heirlooms from my late mother and father.”

Poor woman. I shall keep you all abreast of developments; I do hope she finds justice after all this. The question I suppose from where we are sitting you have to ask – how on earth do you put a value of someone’s ashes? Whilst I am sure the court have wrestled with concept of sentimental value concerning heirlooms and such like, but ashes? No idea. Maybe they have no value and it just calculated by the amount of stress caused by their removal? Rarely do these sorts of issues make it to court where we can see the court’s thinking on such matters, but if they do will keep you posted.

1 thought on “Cremation Urn lost aboard the Costa Concordia”