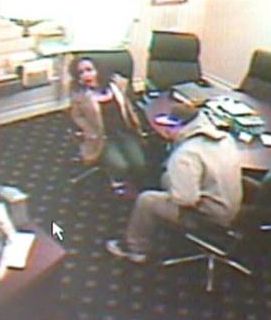 This is a bit different and comes from Bridgeport in Connecticut in the US.

The couple in question tragically lost their son, when they came to collect their sons ashes and pay the remainder of the funeral directors fees. However when left unattended, they took them and ran.

Funeral director Edgar Rodriguez says the couple’s debt was less than $1000 and what make this more interesting is that surveillance cameras in the funeral home filmed the whole thing.

“He goes down, opens the door, pulls the ashes out and then comes upstairs, tells his girlfriend he’s got the ashes and they both run out the door,” Rodriguez described.

Mr Rodriguez had told them he could reduce the bill (but we don’t know by what amount).

I feel sympathy for all involved, the funeral director for loss of income, everyone tends to side against a company in such instances, thinking ‘oh they can afford’ well that is not always the case and not the point. I also feel sorry for the couple who felt they had to stoop to stealing to reclaim the ashes. The truth is we so rarely see the detail to consider the right moral response (if there is only one).

It did make me wonder why has a funeral directors got a surveillance camera, are they in a particularly rough area, who steals from a funeral home .. a modern day Burke and Hare?! I sense I may be being a bit naïf here but still…