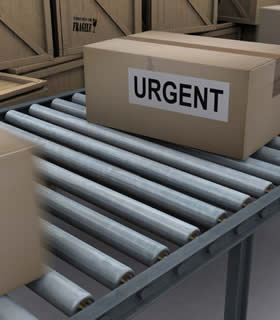 A couple’s dying wish to have their ashes scattered together will never be realised after a delivery company threw away the precious cargo.

Muriel and Stanley Furlong wanted their remains strewn into Liverpool’s River Mersey and in the San Francisco Bay in California, where they had lived for 20 years.

Their son, Wayne Furlong, trusted Parcelforce Worldwide to deliver his mother and father’s remains contained in a special casket from where the family used to live in Liverpool to his new home in Florida. But a breakdown in communication meant the ashes were left languishing at a warehouse in Coventry where they were eventually thrown out after being categorised as ‘foodstuffs’.

Mr Furlong, an Estate agent, said: ‘To be scattered together was their last wish, and now it can’t be done.

‘I just want to find out where they are.’

Parcelforce Worldwide insist they are still in touch with the family trying to resolve the matter, and have refunded the £97 courier fee with a letter apologising for ‘the failure in our service on this occasion’.

Mrs Furlong died in November 2009 in the Royal Liverpool Hospital after developing an abscess on her leg.

She was 79, and owned an antiques shop in Penny Lane near where the family lived.

She had returned to Liverpool after toolmaker Stanley died in 1998 in California.

Their 52-year-old son brought his father’s ashes back to the UK when he flew over from the U.S. to attend his mother’s funeral.

He and his twin sister Sylvia had intended to scatter their ashes in the River Mersey and in San Francisco Bay.

However, funeral directors are forbidden from mixing remains but instead Mr and Mrs Furlong’s remains were placed in a special wooden casket with brass plaques, and put into hermetically sealed bags.

This was then sent via Parcelforce Worldwide to the U.S.

The ashes arrived on Christmas Day 2009 but remained unclaimed until February 1 as by then Sylvia had moved home.

Parcelforce returned the ashes to the UK and disposed of them in February.

Mr Furlong said: ‘It was so clear what it was, and on the bags were labels saying inside were my parents’ remains.

‘They could be in some tip in Coventry now covered in curry sauce.’

A Parcelforce Worldwide spokesman said: ‘We offer our deepest sympathy to the family and we continue to be in touch with them over this matter.’

However they stressed that sending human remains through their service was prohibited.

In a letter to Royal Liverpool Hospital’s Bereavement Services they said: ‘We have no listing of a casket in our records.

‘The team working in our recovery centre were mortified when told of the contents and adamant that if there had been a casket and name plaques they would not have disposed of the item.’