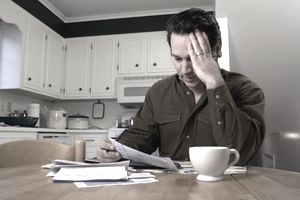 Right, a controversial subject. Let’s us attempt to set out the stall in a nonpartisan fashion. A Pauper Funeral is an old-fashioned/emotive term for funerals where the local authority are required to step in as the family are either unwilling or unable to pay for the funeral. Technically these are known as public health funerals in England and Wales and as national assistance funerals in Scotland.

Why have they been in the news? An article in the Sunday Times (Councils refuse to hand over ashes to families after pauper funerals). A reporter posed as a family member wishing to have the ashes of a relative returned after a ‘pauper funeral’. The Authority in question was Glasgow. The article lead with “Town halls are accused of callously trying to deter the poor from seeking financial help when loved ones die” and “Councils are refusing to give poverty-stricken families their loved ones’ ashes in an apparent ploy to reduce demand for paupers’ funerals, it can be revealed.”

“In a recorded conversation, an official told a woman posing as a representative of a dead man’s sister: “It’s us having to pay for it, so, as I say, she will not get his ashes back.”

Asked if the sister could scatter her brother’s ashes at a special location, our reporter was told: “I’m afraid not. No.”

The official stated the policy three times, explaining that families had no right to the ashes because the state was paying and they would be disposed of in the council-owned crematorium garden.”

Add a bit more of: how your hard-earned cash is being used to subsidise such things and you have created an argument.

However, this is not the whole story. Why do journalists do this: report what they think will cause outrage at the start of an article then report the whole truth towards the end?

When they pursued it, the council said they didn’t have such a policy and they would educate the team responsible to make this clear.

Glasgow city council said it was legally responsible for “the remains of the deceased” and sometimes a number of people tried to claim the ashes “with no reliable or legal way of determining who should take precedence”.

“However, where this is clear, we can and do pass remains into the care of family members.” It added: “The council is currently creating a fund to support families struggling with funeral costs.”

I suppose Over Officious and Insensitive Crematorium Officer Gets Policy Wrong is hardly article worthy. I am not saying that the council are shining lights of virtue, I wouldn’t be surprised if there were some that use tactics to shame families into paying, particularly if they believe a family was using this route, even though they had an ability to pay.

Why was the Times investigating? These funerals have been on rise in recent years. Research by the Citizens Advice Bureau in Stirling shows that 82% of paupers’ funerals in Scotland involve families who are unable, or sometimes unwilling, to pay, up from 44% a decade ago.

Why are they on the rise? Their use has risen in recent years in response to the growing cost of funerals and the declining value of government aid to the bereaved. The Department for Work and Pensions has capped “social fund” extra expenses for funerals at £700 since 2003. The scheme pays towards coffins, flowers and funeral directors’ fees, but eligibility rules are strict and those in work are often excluded. Since 2003 the average cost of a funeral has risen from £1,920 to £4,078.

Couple for things:  Stirling is not a huge are to sample, but I agree they are on the rise. The reasoning for this is perhaps more complex than the capping, but I would imagine it has a lot to with it. Also, average funeral cost isn’t referenced and the price they have used is a bit naughty – that is the average if you bury, we are not talking about burial here we are talking about cremation which is around £3,200.

The article did contain an interesting table on what local authorities spent on these funerals: 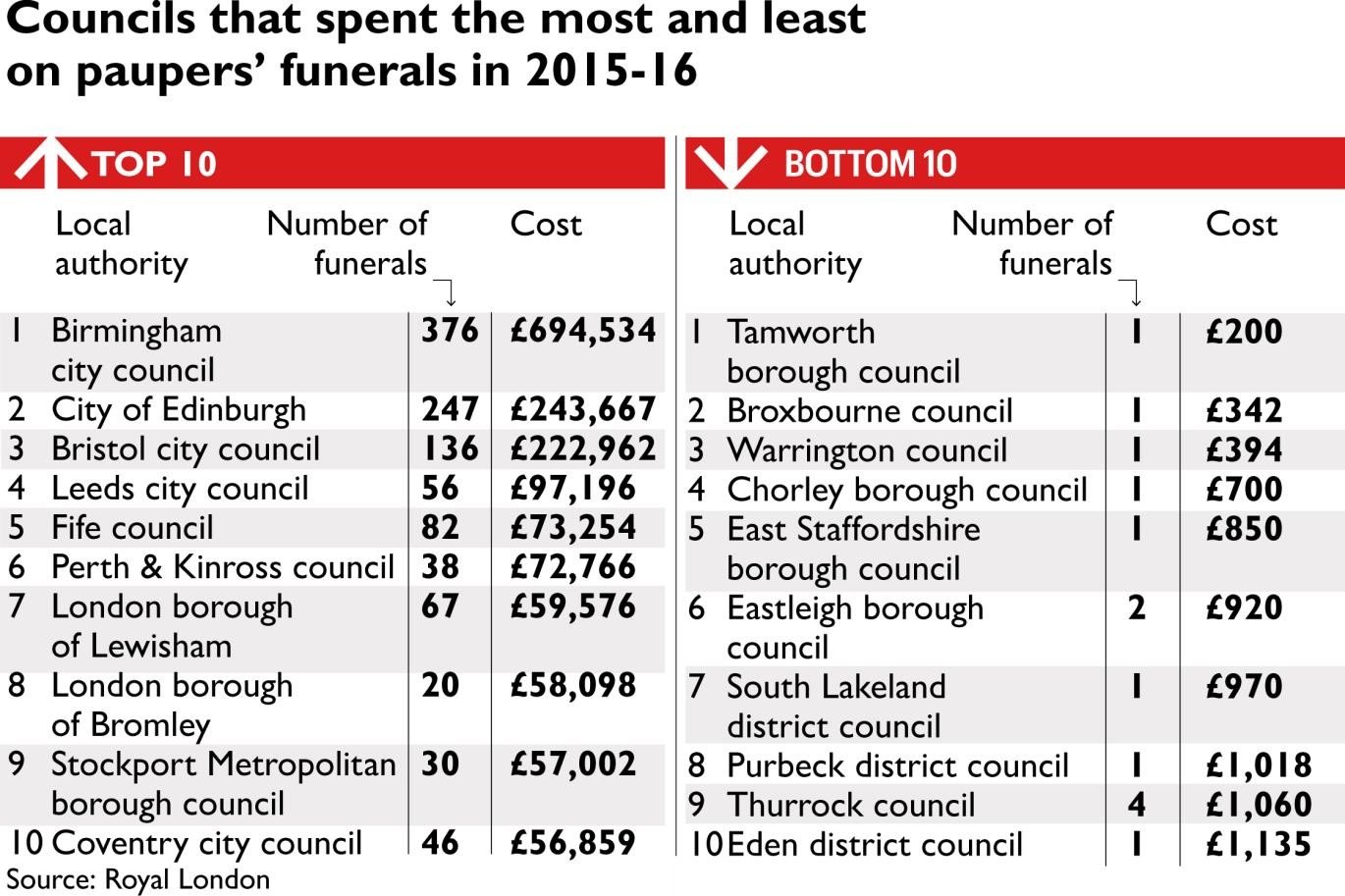 If you had the time you could level this out against prosperity and population to give a more reasoned picture. What the article did point out was fascinating was the variation in cost between some of the authorities.

Research by the insurer Royal London shows that although some councils spend generously on paupers’ funerals — Birmingham tops the list, paying out an average of £1,847 on 376 occasions in 2015-16 — others keep the annual cost to three figures. Tamworth borough council managed to spend just £200 on one funeral. Broxbourne, Warrington, Chorley, East Staffordshire, Eastleigh and South Lakeland also spent under £1,000.

Why are there such variations? Good question, looking at the numbers you might expect the opposite: that those with the greatest cost would have the lowest unit cost. However that is clearly not the case. Tamworth’s cost were nine times less than Birmingham’s, now please excuse me while I dip into the land of supposition. Birmingham’s issue is much greater than most, so they needed a simpler solution: outsource. By getting a set price from a large funeral director for a direct cremation and use your purchasing power to get the price down – £1,847 looks suspiciously like the cost of direct cremation with a bit knocked off. Where Tamworth with just the one, with access to their own crematoria will just be paying for essentials like the coffin. It does beg the question why Birmingham CC don’t have an inhouse funeral directors, looks like they could save a lot of money – but I’m sure there are good reasons.

But how big an issue is it? Not that much in the scheme of things: Local authorities spent £4m on this, there were just over ½ million deaths in last year and 4000 authority funerals – equating to 0.8% of all funerals compared to around 8% of the population that are defined as being in “persistent income poverty”. So even 90% of extremely poor families are managing somehow.

One must also remember that austerity has meant councils needing to maximise income streams, therefore a dramatic increase in revenue from one of their cash cows – crematoria fees. Which is one of the main reasons for the increase in funeral costs recently.

So the article lead to the general array of comments which fall into three broad categories:  the uncaring / tough love brigade: ‘Come on! everyone can pull that sort of cash together’ or ‘Everyone dies they should have thought and saved for it, why should those that hard work pay’; the compassionates – ‘they must be desperate to use this option don’t make their lives any worse’ ; And the plain ignorant ‘All bodies get burnt together’

So there you have it, nothing hugely suprising.