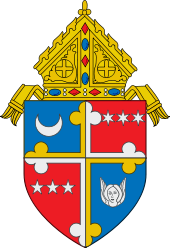 “Cremation, though permitted by the Church, often presents pastoral problems for the Church. For, as experience shows, many people treat cremated remains (aka, cremains) in ways that would be unthinkable in terms of the more complete body. Some of the most common practices involve scattering the ashes on the ground, pouring them in rivers or seas, or scattering them from planes. All of these sorts of practices are forbidden by the Church to Catholics. There are other problems we will talk about below.

But recently, one of the most absurd things I have ever heard in terms of cremated remains appeared in USA Today. Here are some excerpts of the article:

Officers Thad Holmes and Clem Parnell have launched Holy Smoke LLC, a company that will, for a price, load cremated human ash into shotgun shells, and rifle and pistol cartridges.

It’s the perfect life celebration for someone who loves the outdoors or shooting sports, Parnell says….

“This isn’t a joke. It’s a job that we take very seriously,” he said. “This is a reverent business. We take the utmost care in what we do and show the greatest respect for the remains.” It has established myholysmoke.com to promote the service and traffic on it has been growing, Holmes says.

For $850, one pound of ash will be loaded into 250 shotgun shells. The ash is mixed in the cups that hold the shot, not the powder.The same amount of ash will fill the bullets of 100 standard caliber center-fire rifle rounds or 250 pistol rounds…

“Some people have been concerned that a small amount of ash will remain in the animal that is shot with the ammunition, Holmes said. “But it’s just carbon, and a small amount at that. You don’t have anything to worry about.” The animal should be killed quickly by the shot, to prevent any possibility of spreading the ashes in the animal’s blood, he says. The area around where the animal was struck should not be consumed…. The full article is here:

Sigh…Where to begin. It is interesting that the proprietors have to assure us this isn’t a joke. For indeed, it seems just that, a sick joke. And then things descend to the absurd when we are also instructed to thoroughly clean the meat of the animal killed by cremains laden bullet.

Some bad jokes come to mind, to wit: Joe really lived to hunt, now he’s dying to hunt. Joe would really be blown away by this…etc., add your own. But remember, as the proprietors assure us, “this is a reverent business” and thus all joking is inappropriate.

And so it is, but so is loading human ashes into shotgun shells and bullets and shooting away. Simply calling something a reverent business does not make it so.

Again the Church allows cremation so long as the reason for doing so is not contrary to the faith (e.g. denying the resurrection of the Body). But pastorally there are challenges presented to the Church in the way people routinely treat ashes.

Granted, most of the “scattering” practices are not as absurd and irreverent as shooting animals with them. Many in fact consider various scatterings as reverent. But the bottom line for the Church is that cremains, though in ash form, are still what remains of the body. And we should no more scatter them than we would scatter body parts about.

Reverent burial or placement in a mausoleum are the only proper destination for cremated remains. Thus, not only is scattering not considered appropriate, but so is the practice of some of retaining the ashes in their home.

Yet another problem encountered by cremation is the practice of delaying the burial indefinitely. I often find that the burial of cremated individuals is not scheduled the day of the the funeral. When I ask as to the specific date I often get a lot of vague answers. I am beginning to conclude that I will not schedule the funeral until the burial is also scheduled. For too often Uncle Joe is waiting in the closet to be buried.

To conclude, a new cremation regulation, dated March 21, 1997, was granted by the Holy See as an addition, or indult, to the Order of Christian Funerals.

Their final disposition is equally important, say the instructions: “The cremated remains should be buried in a grave or entombed in a mausoleum or columbarium [a cemetery vault designed for urns containing ashes of the dead]. The practice of scattering cremated remains on the sea, from the air, or on the ground, or keeping cremated remains in the home of a relative or friend of the deceased are not the reverent disposition that the Church requires.” The instructions also state that, if at all possible, the place of entombment should be marked with a plaque or stone memorializing the deceased.”

This raises some interesting thinking from the ‘stricter’ end of the Anglican church. So I have replied to the post hoping to get a bit more on the basis as on which the opinion was formulated. I am slightly concerned by the term immoral being used for those following this domoniation of Anglicanism (I think the divisions are refered to as demonitations but I could be wrong) and whilst the author did not use this term he concured with a respondant that did…
This is my responce

I run a website in the UK that advices people what to do with there cremated remains (this is not a plug honest!) and although I am a non believer I try really hard to give those of faith the correct advice. I have a position from the Church of England which is slightly different – I have copied at the bottom of the post, if you are interested.

However I have a few questions that you may be help me with.

Reverent – is this from the point of view of the deceased or the person or persons in charge of the funeral? Does it have a specific definition within the church? Do last wishes have any standing, if reverence is defined by that person?

The term immoral is used – Isn’t this little harsh if the concept of reverence is subjective? Are we Anglicans immoral if they scatter ashes?

The advice for Connor was not to attend the scattering of his father’s ashes, is this because it would infer that he condones the act or is morally corrupted by it? Are there not other ecclesiastical precedents that would lean towards honouring his father?

On the point Al makes that I don’t think Christian teaching promote an unethical side of the funeral profession, just an unfortunate coincidence sadly. And people have written me worrying because of the cost of it all.

In the main posting you seem not to like people having the ashes at home for a protracted period. I couldn’t see anything in the canon that specified or even indicated time span – unless that wasn’t the whole thing? People of faith lean heavily on their church after bereavement surely if you are not obliged under doctrine to require there burial at a certain point wouldn’t it help their grief to give them until a point they felt comfortable?

Any pointer you can give me would be greatly appreciated.

Lastly in the extract from the gun cartridge manufacture – they state it is mainly carbon, it isn’t it is mainly calcium. Carbon makes up about five.

Here is the CoE stance

“So far as the Church of England is concerned, the matter is governed by Canon B 38.4(b) which provides as follows-

The ashes of a cremated body should be reverently disposed of by a minister in a churchyard or other burial ground in … or on an area of land designated by the bishop for the purpose … or at sea.

The ordinary position therefore is that ashes are to be buried.  They may only be scattered if the bishop has designated land for the purpose of the disposal of cremated remains on that land.

We are not in a position to say what land has been so designated.  Individual diocesan registries may be able to assist with such information.”

I will keep you posted