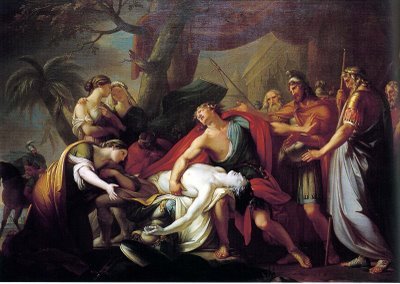 Origins of cremation ashes and rites: The Trojan war is coming to it’s final stages Achilles’ friend Patroclus is killed by by the hero Hector. Achilles is devastated he puts on new armor and re-enters the fight eventually killing Hector. For Achilles revenge is not enough, his grief is so extreme he can not bear to be parted from his friend and refuses to have a funeral. Finally, he is persuaded to do so by an apparition of Patroclus, who told Achilles that he (Patroclus) would not be able to enter the Underworld unless he had a proper cremation, so with a few sacrifices thrown in for good measure Patroclus’ body is placed on a massive (100ft sq) funeral pyre.

Achilles then needed to memorialise his friend and he held a huge games in his honor, but that wasn’t enough when Achilles died he had is ashes placed inside the same urn as his friend! I do hope Patroclus felt the same way!

It would appear that Homers account is one of the earliest concerning cremation rites and it has been suggested that Homer could have been making ‘this bit’ up as cremation was not the common form of funeral at the time of the Trojan war… Still it makes a good story.