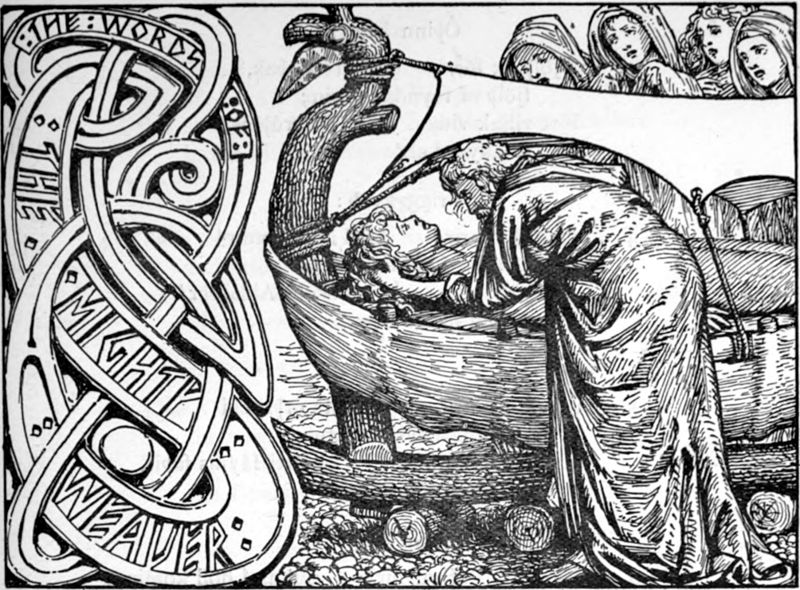 Baldur is an ancient Norse God, in fact the only norse god I have found associated with being cremated in a viking longboat. Baldur was the son of Odin (king of the gods) and his wife Frigg (who gives her name to Friday). Anyway he was a well loved god, famed for his intelligence and it would appear an all round crowd pleaser.

It turns out that Baldur had a bad dream, the vision foretold something terrible was going to happen to him. Frigg being the caring sort of mother asked all living things not to hurt her son. Unfortunately, she omitted to ask the mistletoe as it was too young. Loki (often called the trickster, although we think of him more of a plain old baddy) found this was his weakness. He made a dart containing mistletoe and in a game of throwing things at/for Baldur, Loki [pantomime boooo] got the blind god Hod to throw the offending dart, killing Baldur! This caused Nanna (Baldur’s wife) to die of grief (other accounts have it she threw herself on the pyre)

Baldur had a famous ship called the  Hringhorni (Old Norse “ship with a circle on the stem”) said to be the “greatest of all ships”.  The gods placed him on his longboat ready to be cremated and with him on this ship were place his wife, his horse in full regalia and a poor dwarf , which Thor booted on there for good measure. The intention was to launch the ship and set it ablaze , but they could not shift it so they called for a giantess called Hyrrokkin, she gave the boat a such a massive shove that fire flashed from the rollers (used to launch the ship) and the earth trembled.

Baldurs passing was too much for many and a trip was made down to Hel’s realm (the underworld) and Hel was persuaded to allow Baldur to come back if  everyone wept for him. Sadly one giantess refused – guess what, it was Loki in disguise [boooo]. So Baldur (and his wife) had to stay put and be content to wait for Ragnarok (armageddon) when he will return once more.

By the way the panel depicting the story above is not as old as it looks it is by a German artist called Doepler and dates from late ninth century.

We are the creators of the Viking Longboat Urn if this may interest you.