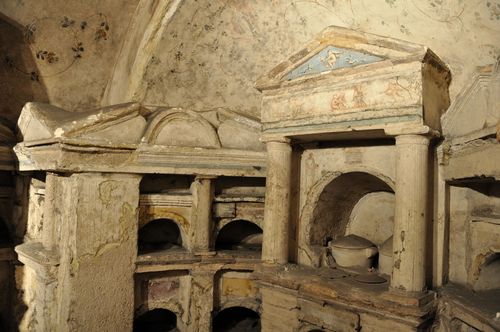 As far back as 1000BC the ancient Greeks had adopted cremation as measure to deal with their dead. It is likely that it was introduced for military reasons as a way of making sure that soldiers killed abroad could be returned home, the bodies were cremated and their ashes are return home to be placed in an urn, one also might think the was a sort early hygiene going on here as large amounts of dead bodies would start to smell and attract vermin.

As a consequence cremation became synonymous with valour and martial prowess, and so funeral rites got more and more elaborate.

And therefore to be denied these rites was shocking, in fact father of the gods Zeus himself had to intervene to ensure that Achilles hand over the body of Hector so that hector Father, King Priam, can have a royal cremation. Achilles’ goes on to set the trend with his ‘friend’ Patrolus (the one whom Hector had slain) is cremated on a pyre 100feet square. Then when Achilles died the mourning goes on for 17 days when the flames were quenched in wine and his bones were soaked in oil and place inside the same urn as Patroclus

Then when power shifted the Rome they copied Greek practices (as they did in many things), again with more embellishment pomp and circumstance. The Romans then developed urns into elaborate art forms and started using Columbarium to store their ashes (these are walls with small niches that store the ashes). It got so common and popular in around 500BC that they had to issue an edict banning cremation within the walls of the city.

Cremation continued to be the norm until around 100AD and went into decline many have considered it due to the rise of Christianity, christens considered it pagan and thought it might interfere with the resurrection. However at that stage the Roman Empire wasn’t that Christian, so one answer may be they had burnt nearly all the wood in the surrounding environment!

Then in reign of Constantine the first Christian Emperor (early 300sAD) stamped out the flames so to speak, by banning it.