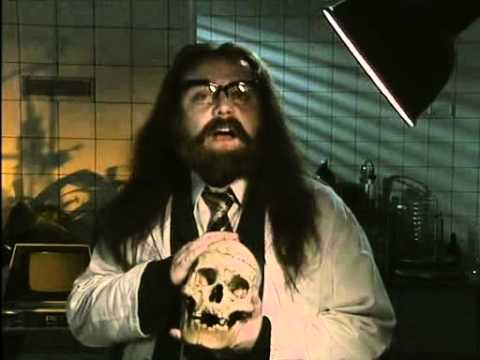 Some time back I posted on the subject of the bead/pearl like objects occasionally found after a certain Buddhist monks are cremated – these items are known as Sarira or Ringsels. These objects are highly prized and supposed to be a sign of divinity.

However, try as I might I could not find what they were or how they were formed (apart from cosmic forces that is). Well imagine my delight when an article popped up entitled What Are the Pearl-Like Objects Found in Monks’ Ashes After Cremation? So, I clicked to be enlightened. Umm I thought it was from Stanford University – credible.  But the study wasn’t about the actual beads per se, but about the energy surrounding them (Dingaling – that’s the sound of the cynical alarm bell ringing in my head).  I know, I know there is ‘stuff’ we don’t know and I shouldn’t poo-poo such things, but I did have a flash back to John Thompson playing the kooky American scientist in the Fast Show (hence the picture). The lead author Nisha Manek is not a Buddhist, but she said she felt an aura from the objects and the team tried to work out whether this was subjective.

Ms Manek explained : “I felt a tangible radiation of exquisite energy flowing from the relics to my heart center. It was highly private and personal, and yet conveyed an immense sense of Oneness or unity with everyone and everything. It had no counterpart in ordinary experience.”

The researchers used methods developed by the physicist William Tiller to objectively measure what Manek perhaps felt. It is his theory that are two types of substances. One is the kind we are able to perceive with our conventional sensors; he describes these substances as being in the electric atom/molecule level. The other kind exists in the space between the atoms and molecules. Tiller and Manek’s study of the relics found that the relics have been imprinted with human intention. Tiller says: “Although we may not consider these objects … to have phenomenal consciousness, there is no doubt that an aspect of consciousness is imprinted into both kinds of objects. In the case of the Buddha relics, over hundreds of years, reverential ‘pumping’ has kept these objects imprinted. If there is no respect or love, the relics disappear,” the report states. The researchers also found that “the atom-molecules within the space [around the relics] are ordered more coherently.”.

In conclusion the study suggests the Sarira may have a certain energy about them that can impact worshipers, but the energy may in part be projected onto the Sarira by the worshipers.  I say Holmes you have it!  Sorry Sorry this is me not them. I admit to a tingle like feeling when I was in the British Library: In the gems section which contains many of the famous texts, but I do wish some would just appease  my western way of thinking and tell me what they are and the process that creates them…. Original article:

2 thoughts on “What Are the Pearl-Like Objects Found in Monks’ Ashes After Cremation? Still None the wiser!”