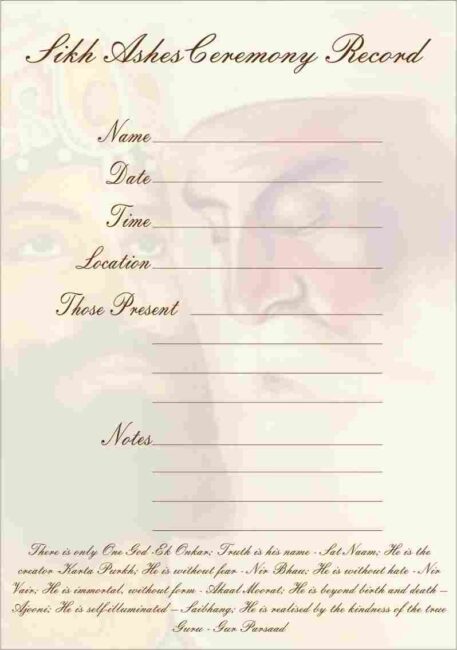 Traditions adapt and move on, until recently many Sikh families living outside the Punjab region of India would have taken the ashes of a loved one back to Kiratpur Sahib, a town in the Punjab, India. The town is the location of the Gurdwara Patal Puri where Sikhs scatter the ashes of their deceased. However over time more and more families have opted for local rivers and this is certainly the case in the UK. The trend has seen a massive upsurge as the Covid Pandemic took hold preventing many families from returning to India.

However with the relatively relaxed laws allowing the scattering in the rivers and waterways it has also meant that these activities have not been recorded formally, it is down to the family to record the event and keep this within their records.

A number of years a ago we produced a ceremony record for the Hindu community which contain the image of Shiva the principal Hindu deity, however we lacked the knowledge to something similar for the Sikh community – knowing what was needed and what was appropriate wasn’t clear. Then over recent month as we saw the number of Sikhs opting for scattering in the UK increase with a corresponding rise in the number of requests for Sikh based certificates. We did not know where to turn, until we had a really kind offer of help from the Sikh Temple in Northampton who were only too happy to assist.

What should it contain we asked, and they wished for two images and a prayer/mantra. The first image was of Guru Nanak Dev ji (the founder of Sikhism and is the first of the ten Sikh Gurus). The second image was of Guru Gobind Singh ji ( the tenth Sikh Guru, a spiritual master, warrior, poet and philosopher).

The prayer requested is called “Mool Mantar” it is the Sikh statement of belief. It is the basis of the whole of Sikhism.

Ek Onkar (There is only One God)
Sat Naam (Truth is his name)
Karta Purkh (He is the creator)
Nir Bhau (He is without fear)
Nir Vair (He is without hate)
Akaal Moorat (He is immortal, without form)
Ajooni (He is beyond birth and death)
Saibhang (He is self-illuminated)
Gur Parsaad (He is realised by the kindness of the true Guru.)