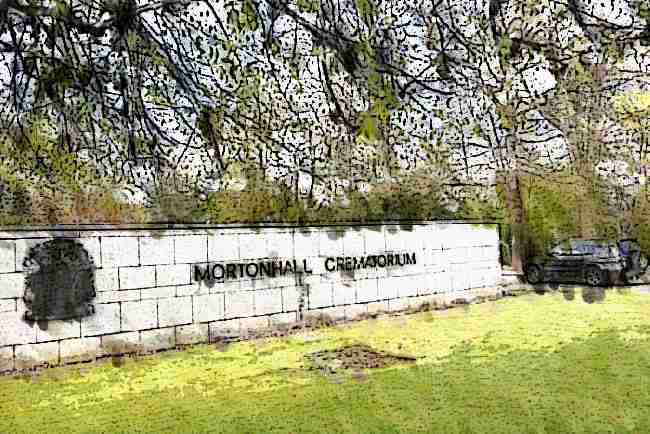 Mortonhall crematorium in Edinburgh has had more than its fair share on controversy. In 2013 it was the centre of the baby ashes scandal. They had been disposing of premature baby ashes and telling parents there weren’t any ashes to collect. This caused a huge furore and quite rightly so! (see our previous blogs for more information at the bottom of this post).Sometimes there aren’t any ashes with a premature infant death which is incredibly tough on the parents. But not to be transparent is unforgivable.

The positive outcome of this dreadful business is an increased scrutiny in the funeral industry in Scotland. By the way, this was not only crematoria who practised this, but now no crematoria does it.

When the notorious murderer Ian Brady died, Mortonhall Crematoria was in the news again for refusing to cremate him – he had requested that his ashes were scattered in the River Clyde, in Glasgow, near to where he was born. Not only did they refuse to cremate him but they also said that they would ‘advise the private crematoria not to accept the request’.

So why is Mortonhall in the news again?

Well the crematoria have said that it would not have accepted the body of a paedophile to cremate if it had known who he was,. They then went on to say “the cremator would now need to be deep cleaned before and after the cremation”.

Mr Levett of The National Association of Funeral Directors (NAFD), the trade body represents a large number of funeral directors, was not happy about this and has waded in saying:

“If Mortonhall Crematorium continues to adopt this policy, this could cause unnecessary problems for funeral directors and distress for the families they serve.

“We appreciate that in certain exceptional circumstances, where there is a significant risk of public unrest, it may be necessary to arrange for disposals to take place in secret.

“However, it cannot be right for a local authority to take it upon itself to pass judgement on people after death, no matter how we view their activities in life.

“We would also question whether a policy of refusing to cremate certain people is compatible with the local authority’s public health responsibilities.

“Forcing a family to approach multiple crematoria before reluctantly agreeing to cremate a person will simply cause distress for the innocent family.”

Mr Kerr – Chief Executive, of City of Edinburgh Council’s responded saying that in ‘very exceptional’ circumstances, a request could be rejected.

“Depending on the particular factual circumstances, where there is a genuine concern about public unrest, the council may accept an application subject to conditions or, very exceptionally, refuse an application.

“Where there is concern that special arrangements may be required, council officers consult the Scottish Government’s inspector of crematoria.

“It may be necessary to consider special arrangements such as cremation out of hours or scattering or interment of ashes in a discreet area.

“In highly exceptional cases it may not be possible to grant an application for cremation.

“As noted above, there is no policy in this regard and each case is carefully considered on its merits.”

Why the tough talk?

So, what is this all about, people must be cremated, choosing not to do it only passes the problem on, surely? I do wonder whether it is part of the council’s stance to rebuild trust by taking a robust stance (and shouting about it) about nasty people as this approach will chime with most people? Who knows, still I’m sure they know what they are doing.

I get the public order thing, but if things are handled discreetly and sensibly as it must have done for other people, it would be okay?

Good for Death and Cremation?

My primary reservation to this approach is that it puts death and conversations that need to happen about death, backward. I’m sure it wouldn’t have crossed the mind of the average person, whether a certain individual, good or bad had been in a particular cremator before their loved one. And that will raise emotional concerns which were not present before. We all know how emotive this subject is and to add something like ‘My dear ol’ Nan isn’t going anywhere near where that badun ended up…’ as if her memory could be tainted by it, isn’t particularly helpful to anyone…is it?

So what are ashes worth? Morton hall case settled out of court

What is the price of ashes?