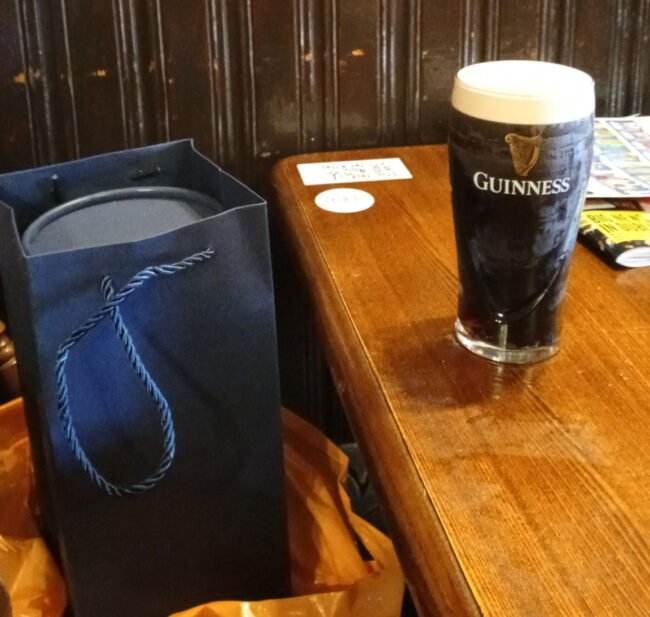 We all lose things; I am dreadful for it. But most things don’t matter, turn up again or often were there all along.

Not so for Paul Gale a security guard from Camberwell in London. He has lost his mum’s ashes, on the way back the pub.

Poor Mr Glee is quite rightly distress about his and has taken to social media to ask if they have been spotted or found.

URGENTLY looking for someone too POSSIBLY help.

On the 22nd September early hours of the morning around 1.20am my Mother’s Remains/Ashes went missing.

They were in a Orange Sainsbury’s Carrier Bag with a Navy gift bag alongside some Red Adidas Superstar Trainers in an Adidas Box in a White Carrier Bag. (I am not interested in these) however just trying too help with the description!

The tube of the Ashes is Blue, with Pamala Sylvia Gale as well as the Cremation Number and date written at the front.

I need these back as deeply saddened.

I would appreciate all the help I can get right now!

Along with the pictures above, Mr Glee had updated the post on the 3rd October

Her ashes (along with the same description as the original post) went missing on the Thorlands Estate outside of Odin House.

Please if anyone has seen or knows anything regarding her remains please contact me!! AS STATED, I AM NOT INTERESTED IN THE RED ADIDAS SUPERSTAR TRAINERS OR ANY OTHER SMALL ITEMS THAT WAS IN THE BAGS!! Very difficult for such a thing to happen. Thank you all so much for what you’ve already done so far.

He lost them after returning from the pub, he had had no sleep and drifted off in the pub. When someone advised him to return home. He can’t remember where (I suppose that is what happens when you lose things). He says he “won’t rest” until his late mother’s ashes are returned.

He went to collect the ashes after a busy night shift and after having no sleep was completely exhausted, after he collected them he popped into the pub (we have a photo of the ashes in the pub with Paul’s pint of Guinness). He was asked to leave after falling asleep, he told the Daily Star:

“My mum passed away on October 13, 2020 from Covid – although, she had a lot of other health problems before that. There were only 13 days left to collect her ashes before they were going to be scattered.

“I’d been at work the night before so I’d had no sleep – I went to go get them which wasn’t a great decision since it was a 45-minute journey.

“I was that tired I fell asleep in the pub before someone woke me up and told me to go home to go to bed.

“So I left, and there’s CCTV footage of me leaving with the bags but I didn’t come home with them. I’ve searched every route I could have taken home and asked in every shop and takeaway in the area but nothing.

“I don’t know if they were taken from me or I fell asleep in the street.”

So Paul contact the police to see if they could help, but as there was no evidence of a crime then it falls out of their jurisdiction. So fair play to him he has asked retailers etc and looked at their CCTV to see if there are any clues. He can see he was making his way home with the blue scatter tube containing his mum’s ashes held in a Sainsbury’s carrier bag – but not enough footage to work out what happened.

He went onto say said: “I feel awful, I know it looks terrible and the last thing I wanted to do was make a post on Facebook but I don’t care how I get seen I just want her back.

“I feel like it’s all my fault. My siblings have been very understanding but I know they can’t be and they’ll be feeling some resentment towards me.

“I’m worried about what that will do to me but I won’t rest until I get her back, I can’t.”

If you have spotted them, please let him know poor chap he must be feeling awful…

On a slightly unrelated note Thorlands Estate and Odin House – one wonders how far the town planners went with this Norse theme… Just image telling everyone you live on Jǫrmungandr Road?!