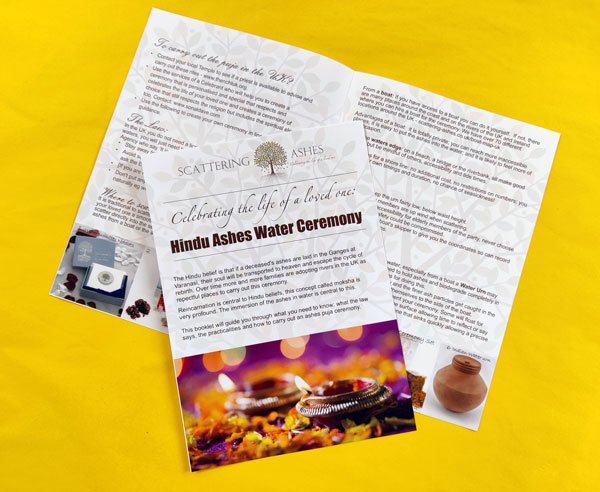 We are proud to announce that we have created and published our first guidance note for water ceremonies for the Hindu community living here in the UK.

Why have we done this? We get many calls per week from younger member of the family that have been tasked with arranging the Ash Scattering Ceremony for a parent or relative. For many this is the first time doing anything like this and they are very keen to honour and respect this person. They want to do the right thing, the question many ask is what is ‘the right thing?’ They know that the ashes have to be scattered in the water but apart from that the process is quite opaque.

The problem is many Hindu’s brought up in the UK will clearly feel a strong cultural attachment but the actual religious doctrine they may not be aware of, they may go to temple for events such as weddings and the like but lead fairly secular lives. This then leads to anxiety in speaking to the temple for these life events such as funerals. In much the same way it does for non-Christian Christians. There is strong drive for tradition, but perhaps something more tailored to the needs and the beliefs of the deceased.

For a number of years we have wanted to provide practical help but as we are clearly outside the culture and the community we were nervous of getting it wrong or looking like we were appropriating. We approached a number temples but were politely given the brush off, which is fair enough, you could easily argue it was none of our business and we were in effect diluting the culture. However we saw the need and the distress it was causing many people and were still determined to help if we could. So we put a shout out if anyone was in in contact with a Hindu Celebrant who could help guide us to provide a sensitive response. We were delighted when someone suggested a lady called Sonal Dave (www.sonaldave.com) An award wining Ceremonies Celebrant, Professional Toastmaster & Public Speaking Expert.

With her guidance https://www.sonaldave.com/celebrant/and expertise with the culture and our knowledge of the practicalities of water scattering ceremonies we we able to put together a brief guidance on how to conduct a Hindu Ashes Ceremony, which includes issues such as legalities and practicalities but also a run through of the religious and cultural observances that should be considered when conducting the ceremony.

This guidance is free, whether someone wants one or a bundle – we are happy to provide them. Or simply click on the image below to go to the PDF of the document. Also we are keen to make sure it represents the broad and most accurate reflection of the ceremony so if there are aspects that anyone wishes to comment on please let us know… info@scattering-ashes.co.uk