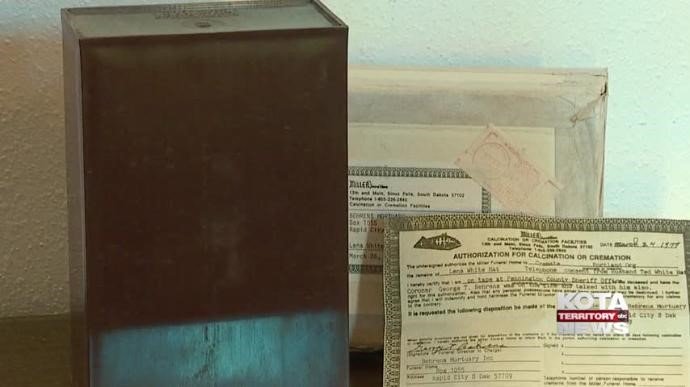 The story starts off rather tragically, it concerns a lady who is murdered. An English lady Lena Booth White Hat born in 1940 went off to the US to live here life and fell in love and married a native American Indian, the couple settled in Denver Colorado. The marriage sounds like it didn’t work out so well her husband Theodore White Hat absconded. And so Lena went in search of him and whilst travelling to find him was murdered in a place called Rapid City.

That was until recently when Lena niece went in search of them and got some help form a local historian in the US, who tracked the ashes down to the funeral home

Wade Wilson from the Behrens-Wilson funeral home said, “I thought to myself well…we do have a few of unclaimed remains that we shelter here for families that don’t claim the remain. I thought maybe this is just one of them…I went down and looked in the area that we have the shelter, and she was there. Then one of the first things we did was contact Ellen that we had the remains.”

However, the cost of getting the ashes back to the family was prohibitive and it looked it wasn’t to be a happy ending, then with some kindness and a bit of luck the ashes are being taken to the UK by a local family travelling there.

“We were just lucky enough to know that there is a couple here in town that they have a daughter that lives over there, and called and see if they would be willing to take the remains over there with them. They graciously said we will take them over and this will happen in November”, said Wilson.

What a lovely end to a tragic story.