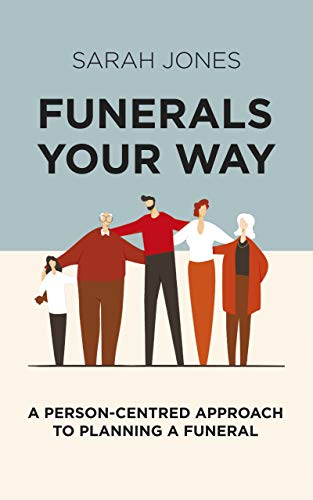 Funerals Your Way: A Person Centred Approach to Planning a Funeral

Sarah Jones from Full Circle Funerals asked me to have a look at her new book on how to plan a funeral, the first thing to say is I am a fan of Sarah and her company, and I don’t think it is surprise that they won an award at the Good Funeral Awards for Best Modern Funeral Director.

The book is concise and easy to read, with a relaxed informal style that doesn’t bamboozle the reader. Technical issues were dealt with very well. It addresses terms used in the industry and did not use jargon and explained issues the reader needs to understand, such as committal.

The breakdown was clear from start to finish, including the part between the death and the funeral which is often overlooked.

It deals with the range of choice and options that many people will not realise are even there. Sarah does push people one way or the other, the book offers thoughts, choices and options. She makes an interesting (and compelling) argument about children and their engagement with the funeral process. There is great insight around many issues, for example if you are thinking of carrying the coffin: Are the handles adequate? Even down to coordinating steps with the different pallbearers.

The use examples and quotes is very good, not only to give you ideas of what is possible, but also to let you know that your opinions are valid.

The bit about ashes was good, I would say that it could include two points – don’t rush to decide and if you choose to scatter then record where. I particularly liked the bit about splitting – something we advocate in the right circumstances. One point, the funeral director does not always know all the options and sometimes may influence in a certain direction – so it is always good to look online. And it always pleasing to see a nod toward our Viking boat!

So yes, I guess I would recommend the book, but those who know me or this blog know I like to try take out bias if possible, so with that in mind…here are some thoughts about what could be included in the second edition:

The subjects of restormation and hair and fingerprint memorialisation, both of which are interesting and important, received a bigger treatment than one might deem necessary (my slight aversion to the latter is probably more to do with my preference to use ashes to memorialise!)

I would like to see more referencing and signposting. There were no references, which I think the book could benefit from (there were none I could see on my Kindle version anyway). As for signposting, this could be increased, as without them the book lacks some context, for example the book talks about organisations that could help it could do with offering some suggestions. And whilst this may have been a conscious decision given the huge amount out there, a professionals opinion is always welcome.

There are two particular areas that could benefit from this. The section on what to do when someone dies is great, only briefly mentions probate – a subject the daunts many people. The second is around help with bereavement, when someone dies this only the start of the bereavement journey some suggestions on where to turn next could help.

In conclusion I would recommend this book to anyone, a tough subject handled well and in just the right measure.