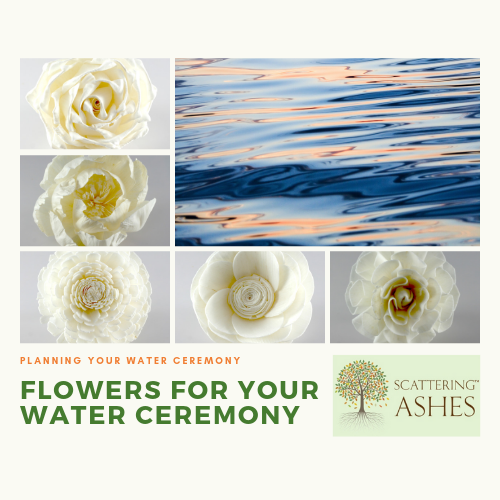 Flower Symbolism for Water Ceremonies. Using flowers can add a very special element to your ceremony.  You can add different flowers simply because you like them. Or you might like to add flowers because they mean something symbolic to you, your family or your beliefs. Flowers can be a central part of a religious ceremony or equally secular ones. The name of the Hindu worship ritual is puja which means ‘the flower act’.

Here are the meanings for the flowers that we use in our water ceremonies:

Jasmine flower has strong associations with eternal love. It can also symbolise purity, beauty and motherhood. Jasmine blooms in Spring and many cultures use it in their springtime festivities.

In Hindu Jasmine is the symbol of divine hope.

Buddhist and Sikh ceremonies believers use jasmine to show purity. This is especially important if you are cleansing the ashes.

In Christian religions jasmine represents motherhood. It blooms in May which is the month of Mary, this is also the month of Mother’s Day in many countries apart from the UK.

In Chinese cultures Jasmine will represent good luck when used in a ceremony.

Hibiscus has strong ties to femininity in the West. People often give jasmine to women in blooms. In the United States hibiscus means a perfect wife or woman. In the UK people would give jasmine in Victorian times to state their appreciation of the receiver’s delicate beauty.

In China people give the  flower is to both women and men and it symbolises fame or personal glory.

A red hibiscus is the flower of the Hindu goddess Kali, and appears frequently in depictions of her in the art of Bengal, India, often with the goddess and the flower merging in form. The hibiscus is used as an offering to goddess Kali and Lord Ganesha in Hindu worship.

The rose has many different meanings, in Greek Mythology it is the symbol of Aphrodite. The Romans linked the rose to Venue. This is probably the reason why traditionally the rose is so closely linked to romantic love. But it is also linked to sympathy and sorrow which make them such a poignant choice for your water ceremony.

There is a lovely article in the Hindu Times about flower etiquette which I really like, you can find it here.

Symbolism of the Lotus flower

The lotus is the symbol of beauty, prosperity and fertility.

According to Hinduism, within each human inhabiting the earth there is the spirit of the sacred Lotus. It represents eternity, purity and divinity and symbolises life, fertility, ever-renewing youth and describes feminine beauty, especially the eyes.

In the Bhagavad Gita, a sacred Hindu text, man is adjured to be like the Lotus. A Lotus should work without attachment. He should dedicates his actions to God. Like water on a Lotus leaf, he should be untouched by sin and stand high above the mud and water.

As ideas were exchanged with Buddhists for thousands of years, Hindu religious leaders began to use the flower as a symbol of peace and eternity. White lotus flowers are usually seen under the feet of deities like Lakshmi, Ganesha, and Saraswati.

In the postures of Hatha Yoga, a major branch of Yoga, the lotus position, padmasana, is adopted by those striving to reach the highest level of consciousness, which itself is found in the thousand-petaled lotus chakra at the top of the head.

In Buddhist symbolism the lotus is symbolic of purity of the body, speech, and mind as while rooted in the mud, its flowers blossom on long stalks as if they are floating above the muddy waters of attachment and desire. It is also symbolises detachment as drops of water easily slide off its petals.

The ancient Egyptians used the lotus plant extensively as a symbol in the paintings and carvings left on the walls of temples and tombs. Scholars believe the Egyptians viewed the Lotus as a symbol of rebirth because it appeared to sink at night and rise again in the morning. It is now known the plant simply loses old blooms and adds new ones on a daily cycle, but it is still a potent reminder of reincarnation and the mysteries of the afterlife. The priests and other religious leaders also brewed the flowers to make a tea with sedative and mild psychotropic effects, which heightened their sense for ritual work.

The Lotus meaning in Hinduism is a little different.

Brahma, the ultimate creator, emerges from a Lotus  This sense of purity comes from the flower’s growing habit of rooting in mud and pushing up through the water to bloom.

Marigold and what it means

Aside from being offered as a sacrifice to gods from Christian, Aztec, Buddhist, Hindu, and Pagan religions, this little flower has strong ties to the sun and its power to resurrect. All types of Marigold offer the same basic meanings because they all share the same bright yellow, red, or orange colour.

Marigold was extremely important to the Victorian flower language experts, they saw it as a symbol of despair and grief. Modern meanings focus on the bright colour and beauty instead. They believe the flower means optimism and success. Marigolds were carried as love charms or spells in the Middle Ages in the UK by both men and women who wanted to attract someone new.

If you have come across different flower meanings please comment below, we’d love to hear them.