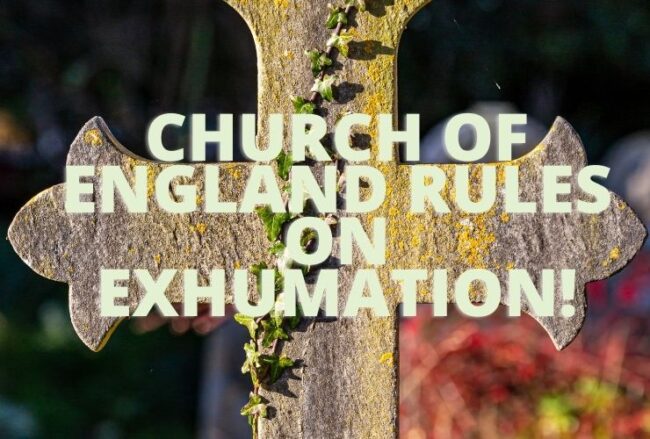 For the exhumation of a body or cremated remains from consecrated ground, it will be necessary to obtain a Faculty from the Chancellor of the Diocese. It is no longer necessary to obtain an Exhumation Licence from the Ministry of Justice, even if it is intended that the remains should be re-interred in unconsecrated ground (see section 2 of the Church of England (Miscellaneous Provisions) Measure 2014, amending section 25 of the Burial Act 1857).

The Church regards burial as final, and so a Faculty will not normally be granted to authorize an exhumation, except in exceptional circumstances, for example, where a body has accidentally been buried in a grave already reserved for someone else, or in any other special circumstances which the Chancellor of the Diocese considers justify a departure from the general rule. The law relating  to exhumation is set out in the leading case of Blagdon Cemetery [2002] Court of Arches, in which the Court discussed the reasons which might be considered as justification for allowing an exhumation. These, in summary, are as follows:

A special form of Faculty Petition is used for an application for exhumation, and advice should be sought from the Diocesan Registrar. http://www.diocesanregistry.co.uk/