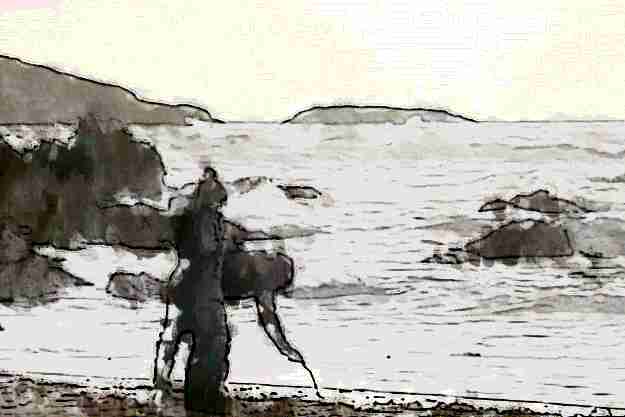 I think it is good when Soap Operas tackle really difficult and emotional challenging issues, although I do sometime wonder whether it is entirely to pull at heartstrings. However that is by-the-by, Monday night’s episode (20/2/17) of Coronation Street saw Michelle Connor and Steve MacDonald say goodbye to their baby Ruairi. In the story the couple suffered the loss of a premature baby.

They scattered the ashes on a beach in Anglesey in Wales.

There is a video clip at the bottom. It is well acted and poignant, Steve marks out the shape of a heart in the sand and Michelle scatters the ashes from a small keepsake urn.

The producers and script writer have done not a bad job here, making the scene realistic and bring some symbolism to the small ceremony.

One, well okay two small gripes. Firstly they should have used something that looked a little like ashes and not just sand. Secondly and this isn’t really a gripe as such, sadly there is not often ashes to scatter after the death of a premature baby, it is difficult for soaps to explain that there was only a small chance of getting any ashes back at all and scenes like this without any preamble may raise false expectations for others in a similar situation – tricky though I will admit.

The article reported that The actor Kym Marsh lost her son after he was born prematurely at just 21 weeks in 2009.

She told OK! magazine: “I had to put myself in the shows of many other parents who’ve had to scatter their child’s ashes, and it was a really difficult and upsetting scene to film.

“For me, I felt like I had to bring Archie home with me, because that’s what I was supposed to do.

“But we’re all different, and I can absolutely see why some families would want to scatter the ashes.

“For many people it must bring a sense of peace while allowing you to grieve properly.

“Like I said, I don’t think I’ll ever be ready to let Archie go so he’ll be staying with me.”