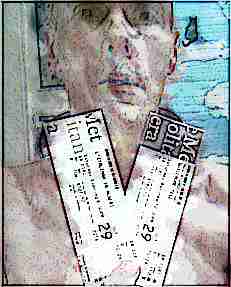 A Dallas man caused a fright at the New York Metropolitan Opera House when he scattered the ashes of his friend in the orchestra pit during the intermission.

The ashes were mistaken for a dangerous substance and the performance had to be abandoned during the second intermission at the matinée performance of “Guillaume Tell’’, people were evacuated and counterterrorism police brought in.

Mr Kaiser, who attempted to exist ‘stage left’ unseen was tracked down, he had intended to honour his friend with this little act.

His act of kindness went badly wrong went wrong. Causing not only an emergency services needing to be called, but people distressed at being evacuated and the evenings performance being cancelled as well.

Now you might say it was an overreaction, and you may be right. However, in truth Mr Kaiser’s act wasn’t funny or quirky or honourable. It was ill-conceived. I don’t wish to sound all grumpy and righteous. But by not thinking this through he will have cost thousands of pounds (well dollars) worth of problems. Let’s say the cost of an average ticket was $50 and there was 800 people there and they all travelled in costing $10 each that is almost $50,000 alone without the cost of people’s time the emergency services even the poor musicians couldn’t get their instruments back “My viola case (black cover) is still in the pit,’’ Met violist Vincent Lionti lamented on the orchestra’s Facebook page. Another musician joined in: “As are all our instruments.’’

When authorities caught up to him, Kaiser said that he came to the opera to “sprinkle the ashes of his friend and mentor’’ who “loved the opera,”. Whilst the police were cross it looks like there is nothing he can be charged with as John Miller, NYPD put it “At this point, I don’t think we would refer to him as a [crime] ‘suspect,’”

So, it was an act of kindness that went wrong should it be left at that?  Well that’s all it can be, Mr Kaiser was very contrite. He said his “sweet gesture to a dying friend” went “completely and utterly wrong”. And went on to say “As a devoted opera enthusiast the reality of the situation weighs heavily on me,” – so those copycats out there please think a little, before you sprinkle (I almost got that to rhyme!)