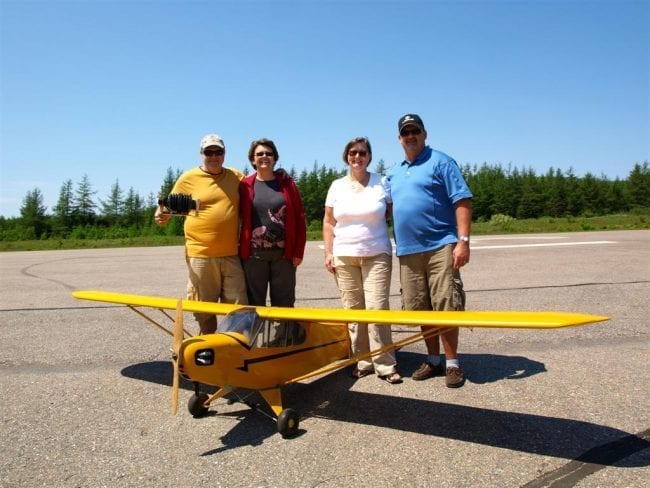 Well this is one more for the list. Mike Whitelaw from Bedford in the USA is honouring his father’s dying wish by scattering the cremated remains from a model aeroplane.

Mike explained “He said to me that he’d love to go up in this plane and have his ashes spread all over Margaree which he thought was God’s country,”

This was not a simple task however Mike had to come up with a creative solution to scatter the ashes for this flight; he needed to modify his cherished J-3 Cub model plane.

He constructed a releasing urn type device from parts purchased at the hardware store, including a toilet plunger.

“The physics of the air passing through and blowing the ashes out, that’s a big of a challenge, but it seems to be working on the ground.”

To test it out, he needed a substitute for ashes. “What we found was similar was actually a combination of oats and kitty litter. Not to be too morbid, but it simulates the consistency of ashes.” he went on to say “I think he’d very proud that we’re doing this and he’d have a good laugh over the whole story of the plunger.”

So fingers crossed the flight will take off from Margaree Valley air strip, he will fly the plane about 150 metres into the air, his sister will throw the switch and their father’s final wish will come true.  “I think he’d be really happy. Hopefully he’s looking down and is happy and hopefully it will go well.”

It doesn’t have quite the same ring does it – oats to oats, cat litter to cat litter!

2 thoughts on “Scattering ashes from a Model Plane”