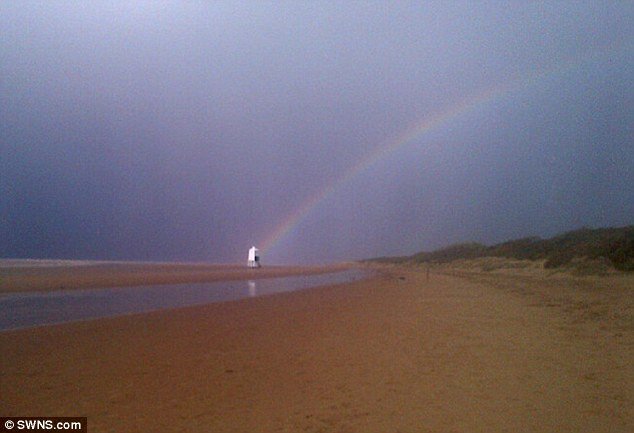 The Daily Mail carries quite a few stories on scattering ashes probably more than the rest of that the UKs national papers put together, why that should be I can only hazard a  guess. I am told that paper has an in-depth knowledge of it readers (I suppose it should really), so I presume its reader visit us too?! Here is a story of a widower and his daughter spotting a rainbow that appeared to arc down to the lighthouse where he scattered his wife’s ashes.

The retired scientist living in Burham on Sea decided to scatter to the ashes of his wife at the Trinity  lighthouse near where they lived. He and his daughter and son in-law where sitting on a memorial bench, he had bought to commemorate his wife, when they saw the rainbow ‘pointing’ to the spot.

Mr Walker said: ‘It was incredible. It must have been a sign.

‘I don’t really believe in God but I think this must have been a spotlight shining down from heaven.

‘It’s amazing that my daughter managed to get a picture of it on her phone.’Vera used to love the beach, we’d walk up and down it and we’d often take my daughter’s dog with us too. She was such a lovely person.’A lovely story I think, what I find interest too is reading the commentary on the story from the Mail-online readers. This little story had 42 comments which seems a lot but I guess they have a massive readership. The commentary was split down a number of lines religious and nonreligious – was this a act of God? Judging by the ‘thumbs up’ / ‘thumbs down’ I would say  the audience was equally divided. Then you had a few know-it-alls keen to spout their scientific reasoning for the  phenomena  (mainly men) and a few arr bless comments (mainly women).  Although after reading them I didn’t feel any more enlightened, however judging by the voting the readers didn’t like heartless commentary or pedants, but gave a big thumbs up to the warm and loving comments, which is heartening.