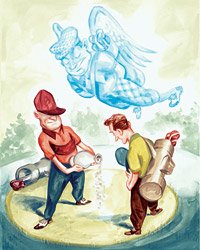 Are you a golfer or was your loved one a golfer? Are you thinking of scattering your/their ashes on a golf course? If the answer is yes to these questions then read on.

I found an excellent article by a chap named Mark Donavan who has considered the angle very thoroughly from a golfer’s point of view. I have copied out the article in full and provided a link at the bottom to the original.

It is funny to hear an opinion from a golfers perspective, Scattering Ashes website was born out of my experience of scattering my fathers ashes at his golf course in Northamptonshire, England. We chose the fairway of the 11th hole, he suffered badly with angina he had to call it a day on the 11th and sadly, although he didn’t know it, it was to be his last round. It was his joy and passion, we even had to wait until he had got his round in before we went on holiday!

It would appear there are many deliberations for the golfing fraternity:

The one thing that seems to ring true with most golfers was ‘not around a tree’ as this seems to where most tend to take a leak!

One thought from me is that perhaps some consideration should given to where the ashes of the spouse will be spread, doesn’t seem all that fair if they want to be with you when they pass, they hated the blessed sport and have to spend eternity occupying the dog-leg of a par 4. Perhaps consider the authors suggestion at the end.

Anyway enough of me, enjoy! I did …

I have the spot all picked out. At Royal Dornoch there is a path that leads uphill from the sixth green to the seventh tee, and at the top is one of the most sublime vistas in all of golf. The glorious links are displayed at our feet; we can see no fewer than nine flags snapping in the breeze. The Sutherland hills are crouched behind us, Dornoch Firth sparkles invitingly just beyond the broad expanse of beach, and the red and white bands of Tarbat Ness lighthouse are clearly visible in the distance. If it happens to be springtime, the gorse-covered hill we are standing on is a blaze of vibrant yellow. Yep, that’s the spot—that’s where I want my ashes spread once I have gone to the great scorer’s tent in the sky.

From Asheville, North Carolina, to Ashtabula, Ohio, under cover of darkness or in the broad light of day, countless golfers who have posted their final score have had their ashes strewn on their favorite links. It’s impossible to determine exactly how many have turned Olympia Fields, say, into Elysian Fields, but my conservative estimate is hundreds, if not thousands, a year.

Legendary architect Alister MacKenzie (Augusta, Cypress Point) may have initiated the practice when he died in 1934 and reportedly had his ashes spread on his favorite par-four hole, the sixteenth at Pasatiempo in California. John A. Mulcahy, the Irish-American industrialist who rescued Ireland’s splendid Waterville links from insolvency in the 1960s, recognized the importance of being urn-ish. His ashes are buried on the tee of Waterville’s seventeenth hole, which is now known as Mulcahy’s Peak. Putting guru George Low Jr., who died in 1995, had it both ways: Some of his ashes are buried next to a practice green at Cog Hill outside Chicago, and some were strewn over a lake on the nearby eighteenth hole of Cog Hill No. 4 (Dubsdread).

Bury Me in a Pot Bunker is the title of a Pete Dye book, and the author means for that directive to be taken literally. He’s not particular—”any ole pot bunker or ditch is fine with me,” says the eighty-one-year-old architect. Arnold Palmer, who grew up playing at Latrobe Country Club, writes in A Golfer’s Life that he would like to have his ashes spread “out there somewhere near my Pap’s on one of the club’s fairways.” Lee Trevino’s instructions are typical of the Merry Mex. “My ashes will be spread on some golf course,” he has said. “I don’t care which one. I’ve told my wife to make sure you reach in there, and if you don’t find two steel rollers and a metal plate, those aren’t my ashes.”

Caddies have their favorite golfing haunts as well. Before the 2003 Players Championship, Brad “The Russian” Krosnoff, a longtime PGA Tour caddie, had his ashes strewn over the water surrounding the seventeenth green at Sawgrass. A few years back, the ashes of a pair of PebbleBeach loopers known as Dawg and the Phantom were sprinkled off the eighteenth green in a joint ceremony one misty morning.

One has so many touchstones, so many meaningful experiences over the span of a lifetime, why choose a golf course as a final resting place? Armchair psychologists have a ready answer for that one. Golf, they say, is a religion, and golf courses are places of worship, so it’s logical for the devout to choose a site that is sacred to them. “I haven’t told my wife yet,” says a nine-handicapper from Long Island who wants his ashes strewn on the ninth fairway of his home course, “but perhaps I should, so she’ll get a sense of how important golf is to me.”

Laws vary from state to state, but as a rule permission to spread ashes is required from the property owner—whether it’s public or private land. Some clubs allow it and some do not, but among those where it is forbidden, the policy seems to be “Don’t ash, don’t tell.” “Our official position,” says the manager of a major-championship venue, “is that it’s not permitted. Unofficially, we know it happens from time to time.”

PineValley has no official policy on the spreading of ashes. Uncertain what response he would receive if he made a formal request, one member decided to proceed on the q.t. when his father died a few years back. The site of the covert operation was the fourteenth hole, a dramatic 185-yard par three. “My dad used to put his arm around me on that tee,” recalls the member, “and say, ‘If I could choose one hole in the world to have a hole in one, this would be it.'” Dad never made that ace, but after he passed away, his son orchestrated the next best thing.

Dad’s ashes were smuggled onto the course in four baggies tucked inside a Titleist box. When the foursome reached the fourteenth green, each player took a baggie and walked to one of the four corners of the putting surface. From those points they moved toward the hole, pouring the ashes in a line as they walked, sprinkling the last of them in the cup. “The next few times I played the hole,” says the son, “I could do no wrong. I could feel my father’s presence.”

Riverside Golf and Country Club in Portland, Oregon, has a more open approach than PineValley does. When fifty-six-year-old Ron “Brogie” Brogan died suddenly in 2004, his memorial service at the club was attended by some two hundred fellow members and golf buddies. At the conclusion of the service, the master of ceremonies announced that Brogie wanted his ashes dispersed at Riverside, with one important caveat: “Under no circumstances will you spread me under any tree.” The men in the room, all of whom had no doubt watered a tree or two at Riverside, roared with laughter.

With his golf bag strapped on the back and his ashes jouncing on the passenger seat, Brogie’s cart was driven out to the 150-yard marker on the eighteenth hole. The pro made some appropriate remarks, dipped a small cup into the urn and cast the ashes to the wind. Others weren’t so respectful. One attendee dug a hole in a nearby bunker, poured some ashes in and then covered them up with sand—an unplayable lie for all eternity. Another guest filled divots with the ashes, which had an unexpected side effect. The next morning, the sprinklers on eighteen were turned on as usual. When the water came into contact with the ashes, the divots were calcified, and soon golf balls were bouncing off Brogie every which way. Sounds like he got the last laugh after all.

Members at other clubs often detect a more benign attitude from their departed brethren spread around the links. “Many of us who play in the early morning or late in the day feel the presence of our old friends in the shadows,” says an officer of a private club on Chicago’s NorthShore. “Some of us swear that a ball we hit is going to end up in the trees or on the beach, but when we get there, the ball is sitting up in the fairway or even on the green.”

Golfers face a number of decisions when choosing a permanent residence: home course or distant mecca, fairway or green, a favorite view or the site of a hole in one? Scott Masingill, a trucking company executive and sometime Champions Tour player, has left instructions for his ashes to be spread about 285 yards from the tee in the sixth fairway at Scotch Pines, his home course in Idaho. The particular area in Masingill’s fairway to heaven is known, appropriately enough, as “the crematorium,” because “if you hit your drive there,” says Masingill, “it’s creamy.”

The aptly named James Ashwanden, a fifty-six-year-old golfer from Kent, England, has a couple of candidates in mind, but his home course is not among them. Right now he’s leaning toward St. Enodoc, a hilly marvel in Cornwall that is home to the famed Himalaya bunker. Ashy, as he was called in prep school, is undecided about precisely where he would like to spend day after day (after day). “Do I go for a place where I’ve experienced the greatest satisfaction?” wonders the sixteen-handicapper. “Or should I choose a hole that I’ve never truly conquered?” Wherever he ends up, Ashy has already scripted the words he wishes spoken as his remains are released into the wind: “‘May they fly more accurately than his approach shots; may they land gently on the green.’ God,” he pauses, envisioning the scene, “I really want to be there.”

As for me, I’m all set. Or am I? I hear the siren song of another course crying out for consideration: Taconic Golf Club. The place where I learned to love the game. Home to so many of my indelible golfing memories. Dating back to my college days, I have made regular pilgrimages to this picturesque gem in north western Massachusetts. My thoughts turn to the third tee. The hole is a beautiful 409-yard par four, with a stand of birch trees and a winding stream on the right, a stretch of pines running down the left side of the fairway. The green is framed, in the distance, by a pair of majestic mountains. A perfect drive splits the V that they form. It’s a view I could look at . . . forever.

So, what’s it going to be: Dornoch or Taconic?A veritable Sophie’s Choice for the hereafter. There’s only one solution.

Memo to loved ones: Divide and conquer. 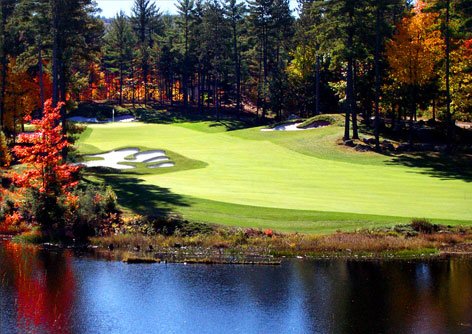 1 thought on “A fairway farewell? The golfer’s dilemma”