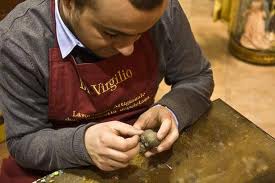 Full credit goes to Beverley Hadgraft the author of the original article in the Australian daily Telegraph.
In the original article there were four different voices from four different experiences I have put a link at the bottom if you wish to see the article in full. I have split it into four parts for people as each person has an entirely separate rationale and it also makes it easier to comment on and search for.

“I made clay figurines from both my parents’ ashes” Angelika Schenk, 62.

“My father Willhelm died at home with me. He was 95 and happy here but I knew his heart had always remained in his childhood home by the Baltic Sea in Poland, so I decided to return his ashes there.
“The problem was transporting them. I had to fly into Germany and their customs won’t accept ashes. An artist friend came up with a solution. We would mix the ashes with clay and make them into figurines. We worked out the right amount so the clay wouldn’t crumble during firing.

“I worried about what figurines to make but in the end my hands worked without me thinking about it. I made little ancient tribesmen, boats, huts and a mother goddess figure – all creating the story of the place my dad was from. I felt as if he was with me the whole time and it made me reflect about who he was and who I am as a result.

“I ended up taking the figures to a little museum in his home town. I told them they were my father’s clay figures relating the history of this place (I didn’t mention the clay had ashes in them – it was only a little amount after all). They were totally excited and the figures are now on display in a glass case.

“My family has since combined my mother’s ashes with clay to make angel figurines. We did it all of us together, around the kitchen table, talking about her the whole time. As each figurine was finished we put it on a shelf with candles and photographs of her. It was quite magical.”

Now that is novel, quite unlike the majority of stories about memorialisation that come our way. It would appear that this mostly came to pass by accident as it where. The family were keen to return their father to whence he came, much like the first experience – a sort full circle if you will. It was only due to the fact that travelling with them would be problematic that they decided to incorporate them into figurines. In the end the ashes have taken on a new guise, being in a museum and part of a shrine too – something very close and personal.