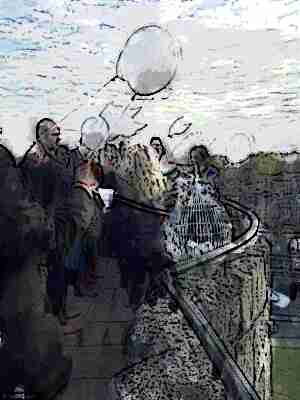 David Gest TV impresario and ex husband of Liza Minnelli passed away in April this year and after a public funeral in Golders Green in London, his nearest and dearest decided that York would be the most appropriate place to scatter his ashes.

David loved the city and had said that was where he wished to die, he had even quipped that he wanted his ashes to be scattered outside a sandwich shop called the York Roast Company where he was a frequent visitor.

Instead the estate choose to scatter the ashes from the iconic Clifford’s Tower within the city. Imad Handi, David’s close friend and co-producer, explained: ‘He said that in his estate if he passed away he just wanted somewhere nice in York. We decided it was a peaceful place.’

The ceremony was small, in celebrity terms, around 20 close friends and family gathered. A pastor led a short service on the turret, which included a reading by David’s sister. The ashes were scattered over the grass below and then white doves and balloons were released.

Clifford’s Tower, which is managed by English Heritage was closed for the day to allow the service to take place. A spokesman for English Heritage, custodians of the tower, added: ‘We were approached by David Gest’s family who asked if they could scatter his ashes from the top of Clifford’s Tower in a small, private memorial.’, ‘As he was an adopted son of York, we thought it an appropriate thing to do for his family.’

Rather bizarrely the Mail interviewed the sandwich shop owner Wayne Chadwick who thought the ashes were coming his way and had assumed the scattering would take place at the shop, and was a little disappointed when they didn’t. He was quite philosophical, he is quoted as saying ‘I am a bit disappointed. But we don’t have any rights over what was to happen to the ashes and if his inner circle wanted to scatter them without any publicity I can understand that.

‘There were practical difficulties in disposing of the ashes in a land-locked shop so from a respect point of view I wanted to leave the final decision to David’s friends and family.’

This little story is quite revealing, what is pleasing for us is that the ashes ceremony was an important part of the farewell. The ceremony was more attuned to the deceased way of life, more celebratory, more unique, less funereal. The use of the clergy, doves and balloons all adding to the occasion. This is, as we say, a proper #4thceremony.

Finally I indulge myself  in the fantasy that Gest’s nearest and dearest found inspiration for the choice of location on the website. However, I do find the decision to close Clifford’s tower done for the day rather odd. I wonder whether English Heritage would do this for the likes of ordinary folk? They have certainly set a precedent, whether they were handsomely compensated in donation terms or just ‘free to those that can afford it, very expensive to those that can’t’. I wonder why they didn’t just have an evening service and close slightly early…?