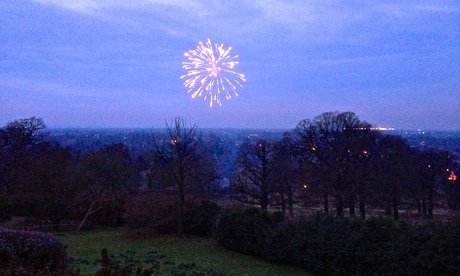 I suppose it is because we get regular enquirers about putting ashes in fireworks that I don’t think there is anything unusual or strange about it, but I suppose we are a bit more exposed to it than most, so when the Dearly Beloved passed the Family Section of the Guardian across the breakfast table the other week and said: have a look at this – a lady scattering her mum on Richmond Park using fireworks – it is a lovely piece.  I did have a look, Indeed I thought what a lovely piece and then I thought do people still think this is left-field? I took a straw pole among friends later that day, using less than scientific rigor I will be honest, but nevertheless I discovered that indeed it probably was.

So here is the article: http://www.theguardian.com/lifeandstyle/2014/jun/07/we-sent-mums-ashes-up-in-a-firework

I thought there was superb insights, particularly when the Author Abigail Flannagan is asking her mother to take it a bit easy:  “I refuse to live a boring life,” she told me one afternoon when I’d been nagging her about slowing down; drinking less and not using budget airlines like buses. “I already can’t do so many things I’d like to, so forget giving up wine or anything else. I’d rather a few more years of fun, than a dull existence for decades. It’s my life, my choice.”

And the detail about nearly hitting a runner with the first firework – opps!

My normal modus operandi is to critique and question such articles, yet here it is all set out to understand and appreciate.

My one slight issue would be to disagree that this is an un-British approach, Ms Flannagan (gosh this sounds so pompous when you write like this and christian names sound too informal) writes: there was a collective acceptance and innate understanding that it was both utterly possible and utterly plausible that Mum would have wanted something so essentially un-British as frivolity and freedom of expression in death, and therefore it was neither questioned as a concept or action. I would argue that as a nation we are very much up for something a bit more ‘loud and proud’. It is true we are still reluctant to speak about death,  but when you do get people on the subject (particularly Baby-Boomers and younger) there is a much more celebratory approach wished for and fireworks resonate with the vast majority.

So I say done you Judi Smith for going out with a Bang!

Note: the photo is copyright Abigail Flanagan – thank you for your kind permission for us to use it

2 thoughts on “Ashes in Fireworks: a lovely Guardian article”