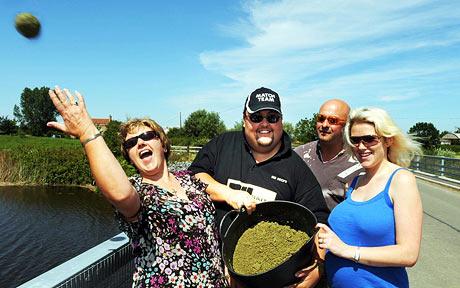 People who have a passion for a sport often choose to have their association enshrined with their ashes. So whilst the request Mr Peter Hodges, an angler from Somerset final wish may seem strange to many, to others it has perfect resonance.

When Mr Hodge, at the age of 60, discovered that had motor neurone disease he decided that as a final request he would have his ashes mixed into his secret ground-bait recipe and flung to the fishes.

Mr Hodge had been a keen angler since the age of 20 and his favourite spot was on the River Huntspill, near Bridgewater in Somerset where he could usually be found with his rod and line.

After he was cremated his ashes were mingled with 30lbs of fish food and his wife and daughter were the first to catapult them into river to signal the start of a fishing competition for Hodges’s friends.

Mrs Hodge, 56, said: “Pete always said that when he died he wanted his ashes to be mixed in with ground-bait.

“He wanted the fish to gobble him up so he could swim up and down the river after his death.

“Everything that he wished for was done right down to the last. It was only right for us to carry out his final wishes.”

Before he died Mr Hodge said: “It may sound strange but it is my dream; to be back in the river catching fish is where I belong. I hope my friends make me proud with their catches.”