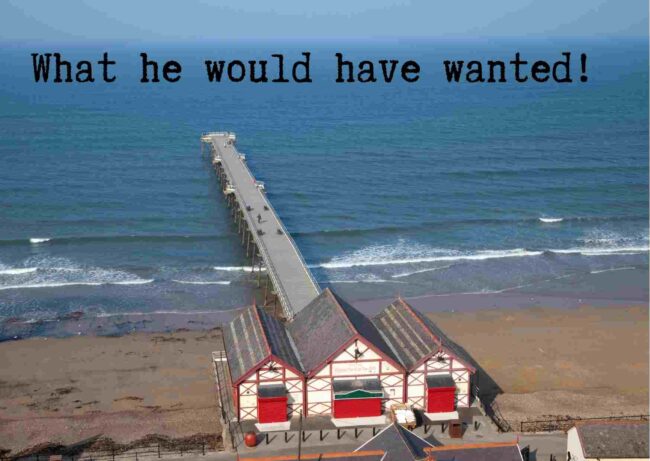 This posting is in applauding a short story about a stepmother and her stepchildren taking the shared father/ husbands ashes to be scattered in the sea near Saltburn in the North East.

The writer conveys the emotions of the characters really well.

Highlighting a common issue around primacy of rights and disagreements over  how to memorialise … or what the loved one ‘would have wanted’.

I have repeated it as do think it is worth sharing…

Shoes squeaked against the sand as Rose led the straggling cortège towards the sea, her glorious pre-raphaelite hair streaming sideways like red catkins in the brisk breeze that was blowing along the coast.

Ben, the youngest, was immediately behind her, his chubby little legs moving at top speed, whilst Jane and Ollie brought up the unwilling rear.  The set of Ollie’s mouth told Jane that he’d gone somewhere else in his head, though the tiny pulse visibly flickering at the base of his throat spoke volumes about his mood.

Jane sighed.   At breakfast Ollie had initially refused to take part in the morning’s activities, causing Rose to indulge in yet another attack of the vapours.  The other hotel guests had looked on with undisguised interest, as Rose, back of hand raised languidly to her broad forehead, and eyes leaking perpetual streams of tears, had bemoaned the unyielding nature of the stepchildren she’d inherited.

“It’s silly,” Ollie had explained, patiently.  “It’s not what he’d have wanted.”

“How can you say that?” wailed Rose dramatically, “I was his wife, we were soul mates.  We understood each other in a way you can’t even begin to imagine.”

Ollie closed his eyes momentarily and Jane realised that the battle for ownership of their father was continuing in death, just as it had in life.

Both Jane and Ollie, who, on their brief holidays with their father had tolerated Rose as an inexplicable but apparently necessary adjunct to their father’s life, were now united in a battle to preserve what they could of his memory, whilst Rose tried to re-create something entirely different out of the four years she had spent with him.  Ben, remembering little of his father before he’d left their mother, had watched cautiously from the sidelines.

Jane had repeatedly kicked Ollie under the table, and eventually he’d agreed to take part.  Sometimes, Jane thought, it was easier to concede than to give Rose licence for further drama.

As they trudged towards the sea, Rose was clutching a cardboard cylinder which, having previously held a bottle of their father’s most expensive whisky, now contained his ashes. She had decreed that these should be scattered on the outgoing tide in Saltburn, the seaside village where he had been born.  The fact that he’d left there when he was three, and had never even given a thought to the place since, mattered not to Rose.  She knew her soul mate, she’d said, and she knew what he would have liked.

Jane and Ollie shared the opinion that this was not the case, and had concluded simply that Rose recognised the opportunity for dramatic tribute wherever she could engineer one.  And this was one such.

The ragged procession stopped, and the four of them stood line abreast at the water’s edge.  With the cardboard container gripped between her knees, Rose rummaged in her capacious straw shoulder bag, her cotton shirt outlining her slender frame as it clung to her in the gusting wind.  She withdrew three self-sealing sandwich bags full of grey dust, which she then solemnly handed to each of them.

Jane raised her eyes to Rose’s face in horror, as the sandwich bag was pressed into her palm.

“It’s what he’d have wanted,” Rose declared melodramatically “to be cast upon the waves by his children”.

Ben looked doubtfully at his sandwich bag, whilst Jane caught the dangerous gleam in Ollie’s eyes.

Rolling up her linen trousers, Rose paddled into the water until the shallow waves reached her skinny calves.  She turned to the children, beckoning them forward.

“Come on,” exclaimed Rose impatiently, oblivious to the significant swell of water that was building up some distance behind her.  Ollie maintained his grip on Jane, whilst Ben clung to his brother’s leg, uncertain whether to follow.

Rose turned just at the moment that the wave, now waist high, broke over her, knocking her off her feet and sending the cardboard ‘urn’ flying out of her reach and away on the receding wave.

Over and over she keeled, until spluttering loudly she struggled to her feet, soaked to the skin.

Ollie sighed, and then released the contents of his sandwich bag, indicating to Jane and Ben that they should do the same.  The stiff breeze blowing along the shoreline was a more than willing conspirator.

Rose screamed in revulsion, brushing desperately at the film of grey ash that had enveloped her from head to toe, sticking firmly to her hair, clothes and skin.

Ben looked on with interest.

“Daddy’s all over Rose,” he observed helpfully.

Ollie led his brother and sister back up the beach. “I think he’d have liked that,” he said with obvious satisfaction.

For the first time that day, they smiled.