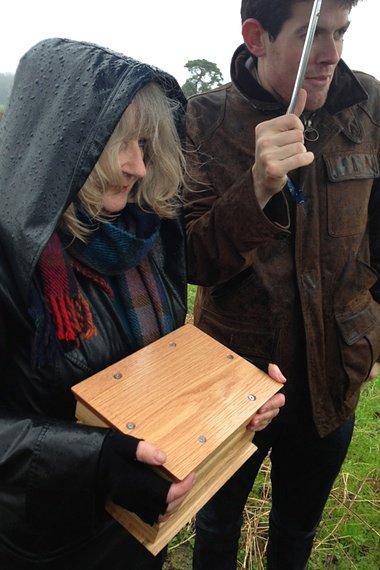 The following piece is copied unedited straight from the Family Section of the Guardian newspaper. I believe it captures a very British scattering ceremony: the emotions, the situation and the actions – I would encourage everyone to read it.

You would never think to take a screwdriver when scattering your grandmother’s ashes. At least, I didn’t. I may have spent many happy afternoons rooting through her toolbox (she is still the only grandmother I’ve ever met who owned her own set of files and wrenches) but it simply didn’t occur to me that we might have to come tooled up for the occasion.

At the beginning of this year, my mother, sister, new boyfriend and two women who, like all the best friends, have become adopted members of our chosen family, trudged up a muddy hill in the middle of rural Shropshire to return my grandmother to the land from which she sprang.

It was neither grand nor particularly remote. It smelled of wet grass and wood smoke. But it was, nonetheless, apt. For my grandmother, born in 1916 and who lived her entire life in a single county, was a woman absolutely of the earth – she had a voice like gravel, a will like granite, grew food in her own soil and was the rock on which an entire family was built. Throughout my turbulent life, she was the only person I could ever place with absolute certainty. I knew, without doubt, where she was sitting, when she was eating and what she was doing at any hour of any day. She was immovable, elemental. When she wore a girdle, kissing her face was like climbing a rock face; when she was saying goodnight, she was as soft as moss.

So I found myself sliding up a pocked and tufted hill overlooking the village of Much Wenlock, in jodhpurs and heeled boots, carrying a wooden box of her ashes. Ironically, for a family whose sporting achievements begin and end with the ability to get out of a chair unaided, this was also the birthplace of PE, thanks to that tyrant of the string vest William Penny Brookes, who held the first Olympian Games there in 1850. God knows what Brookes would have made of our wheezing ascent. There were a few, quiet murmurs of alarm as we shambled our way past a herd of huge, horned cows. The wind whipped around my ears and the rain continued to fall. It wasn’t exactly ancient Greece but it did feel like an odyssey.

Then, as so often in life, things descended from epic to farce. My mother slid her fingers under the lid of the small engraved box in which my grandmother’s ashes had spent Christmas and New Year, and pulled. It didn’t budge. She pulled again. Absolutely nothing.

As a cold drop of rain trickled down the inside of my jumper, we turned the box over to discover that the entire thing was screwed shut. Firmly, undeniably shut. We held our breath. There was silence. I began to laugh. Quiet, embarrassed snorts at first, but these soon gave way to full, honking, goose-like laughter. Here we were, standing in a grieving circle, upon this blasted heath, teeth chattering, cowering under umbrellas, clutching soggy bits of paper scrawled in ink with eulogy and prayer, trying to break into the last earthly remains of my most loved grandmother. There was nothing to do but laugh.

The ribbon on which life is held is bound on one side with laughter and the other side with grief. This is as true in the moment of memorial as it is in celebration. So I feel no guilt for my laughter. My grandmother was an incredibly funny woman. She had more witty comebacks, more withering one-liners and more razor-sharp insights than anyone I’ve ever met. Never cruel, never boring, never imposing – she could simply tell it like it was and in the process charm an entire room. So I think – hope – she would have laughed too. After all, this was the woman who could drink jockeys under the table. This was the woman who flirted with the handyman who came to fix her bed after the combined weight of overnight guests had bent its frame. This was the woman who laughed to the point of tears when her son tickled her. This was the woman who told us all on her birthday last July that she would wait to see Christmas and then let go.

In the absence of a multitool, I had a go at some of the screws with my smallest house key. They didn’t budge. My poor boyfriend searched his pockets desperately for a pen knife. Nothing. Finally, my mother marched right back down the hill and knocked on the door of the nearest farm. In her best demanding voice, she asked if she could borrow a screwdriver, “So I can scatter my mother under that tree.”

The man on the threshold barely flinched before padding into his kitchen to look for a suitable tool.

At last, as we huddled in the rose bushes giggling, a screwdriver was located. Once again, we began our sole-sucking, watery ascent to that tree, overlooking that hill and the old vicarage in which my mother was raised. Perhaps it is easier to be practical in the face of death in the countryside. After all, not more than 20 feet away, in an old red brick outbuilding, my mother used to peer in at the small furry bodies of pets and livestock that could not be saved by my grandfather’s gentle, veterinary hands. Death and life turn like a wheel across rural England, through days, through seasons and through years. You cannot have one without the other. Just as you cannot have laughter without also knowing sadness.

Once we’d got to the top of the hill, my mother held the small bag of ashes – the dust and grit to which we all must, eventually, return – against her chest. My sister said the prayer taught to us all by my grandmother. We looked at an old photograph, I said a few words. The rain fell, the cows tore leaves from brittle branches, a windmill turned in the distance. And then it was time to let her go. To scatter to the earth and air the last tangible pieces of a woman who will live on not just in anecdote but in our genes; the curls in my hair, the blood in my mother’s thumbs, the beating of my sister’s heart.

As I watched a cloud of whiteness skirt dangerously close to my boyfriend’s coat, watched specks of grey settle on the hoof print of a cow, saw ash mingle with earth and rain, I continued to smile. Later, as we trudged back down the hill for a pub lunch, returning that vital screwdriver and steaming our coats before an open fire, we carried on laughing. Because that is what families do.

Families are collections of people woven together by shared stories – some dramatic, some tragic and some hilarious. We live and die in the tales we tell. We are knitted into being not just with blood, but also with words. And so this story about my grandmother’s ashes is one I hope to tell my own grandchildren one day.

The central mishap of urn, brings out the humour that is so often present yet sometimes denied or tinged with guilt. What is more it can’t be the first time this has happened to a family and now although most people opt for scattering the information that was needed on the practical side clearly had not been passed on.

It is interesting I see that the family had considered the aspects of their ceremony before embarking on their ‘odyssey’: the photo the prayer the words. And notable too was that they had not held on for better weather nor that the group was entirely made up of the family quorum, but included non-family members too.

This is not an untypical ceremony even down to the perilously near miss with the ashes on the wind. One final point on the choice of location: the vantage point, where the location allowed the group to take-in more visual aspects of their loved one’s world.

Here is a link to the original article: http://www.theguardian.com/lifeandstyle/2016/jan/23/we-saw-gran-off-on-a-hilltop-with-a-touch-of-farce-and-a-screwdriver