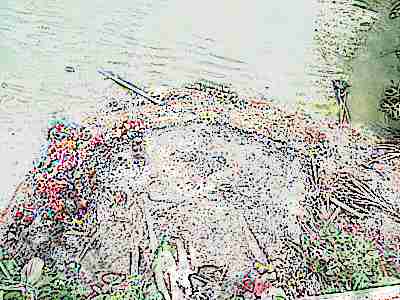 I hate having to admit my ignorance, but I never knew: the largest ethnic make-up of people in Trinidad and Tobago hail from the Indian Sub-continent. And with them they brought Hinduism and associate death rituals.

Well it seems that where bodies are being cast into the waters of the river Caroni the site becoming very degraded to the point that many remains are not making it into the water at all and are piling up on the river bank, making it unpleasant to visit and use and also preventing the immersion of ashes into the water as dictated by Hindu belief culture.

This has been brought to the attention of the Authorities by a Mr Jadoo, who also sits on the Sanatan Dharma Maha Sabha (the Hindu Council)

Jadoo said “I was here on Wednesday last for the cremation of my brother-in-law. Normally after a cremation when everything is burnt, the ashes and remains are collected the following day to do the obligatory prayers.

“I was appalled to know at the end of the walkway or gangway that you have to lift the wheelbarrow and throw the remains over and they’re not reaching the water.

“That is not the way as prescribed in our sacred texts the Garuda Purana governing the rites for the departed soul, which clearly states that it must be immersed in water and that is the only time it becomes a liberated soul.”

He wants the authority to build a chute so the ashes can go into water with ease or extend the gantry over the water.

The local authority confirmed that the cremation site was their responsibility and he was not aware of the accumulation of ashes.

They said, “We take very seriously the way that we treat our deceased because that is one of the marks of a civilised society, the way we treat persons who left us.

“We know that it is a sacred site and we will have officers visit and myself also.”

And that “[they] will listen to the recommendations of affected family members and the corporation needed to look at a better way to dispose of the ashes.”