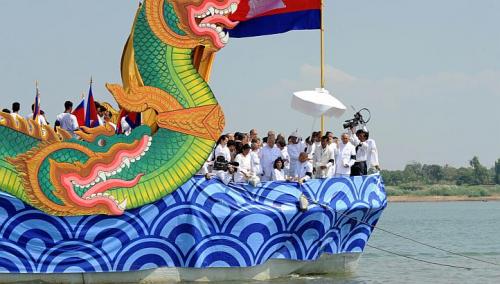 King Norodom Sihanouk of Cambodia has been cremated, he had abdicated twice, led his country into the terror of the Khmer Rouge and then out again. He was cremated in a custom made 15 storey crematorium and then his ashes were scattered on the Mekong where hundreds of thousands of Cambodians gathered in the capital Phnom Penh to witness the elaborate funeral rites.

King Sihanouk passed away in October last year at the age of 89 and has been lying in state for almost four months.

According to his last wishes his ashes were split, some were placed in a urn in the grounds of the Royal Palace near to where his infant daughter was laid to rest. The rest were scattered on the mighty Mekong in an elaborate ceremony that drew upon a number of religious traditions: Buddhist, Hindu and animist ( a religion where natural physical entities—including animals, plants, and often even inanimate objects or phenomena—possess a spiritual essence.)

The other striking thing about the cremation is that the crematoria was built at a cost of £760,000 and will be deconstructed, in accordance with Cambodian tradition, after the ceremony .

I have put two video clips in this post, a short one from the Telegraph so you get the general idea, the other is the third part of a series of three clips about the ceremony of collecting the ashes, the first two are not that interesting to the impartial observer but the third one shows mourners collecting the remains (bones), which are quite large in size. In certain eastern traditions they don’t pulverise the bones but put them whole into the river, hence the reason you see a number of bags being placed on the barge in the first video.


The collection of the ashes: