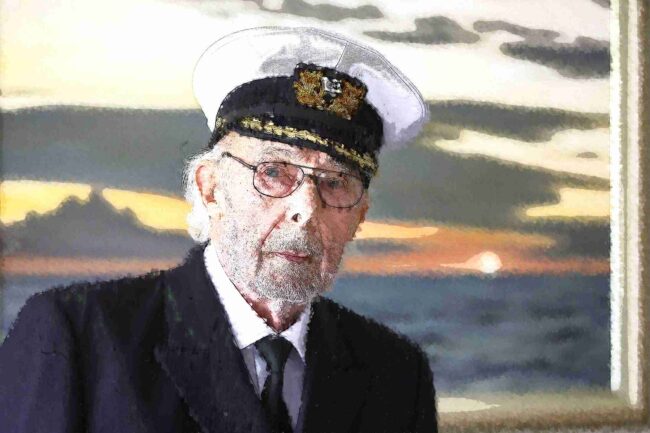 I love reading about ashes culture in different parts of world. Even our close Continental neighbours have a very different approach based on tradition and religion that can seem strange, Germany is a case in point. German law is very strict around ashes, they are considered in the same light as a body. In fact, after Cremation there are rules about what you can and can’t do with them, basically either bury or woodland bury – none of the laissez-faire attitude of us Brits.

The good news for our tectonic cousins, there is a campaigner for sea burial of ashes. An old sea dog called Captain Horst Hahn, an 89-year-old from Hamburg. Who is passionate about allowing families to scatter the ashes of a loved one in the water.

This article in the Daily Sabah an English speaking online newspaper for Turkish diaspora. So, the interview with Herr Hahn is fascinating he wants to myth bust, dispelling the notion that the ashes travel and drift to the exotic places that we dream of for our loved one to visit and instead he informs us they settle on the sea bed, roughly in the area where the ashes were scattered.

“What remains, he says, are not ashes but granules. “We are pure lime.”

In a burial at sea, the human “granules” sink to the seabed and form a little molehill there, he says. “You are a little white mound that quickly gets covered in sand. The sea wraps you in a cloak of love”, Hahn explains with surprising tenderness in his voice.

And goes on to say “Gradually, suspended particles, seaweed, wood and “fluffy stuff” cover the human remains and fish even feed on them, though they avoid the lime”, he says.

So, I concur to a point. Yes, the heavier particle of ashes will sink and stay pretty much where they started, but the finer elements – these will be carried in suspension and will drop at unknown spots depending on the currents. I would also like to correct his assertion that ashes are pure lime: lime is a calcium-containing inorganic mineral composed primarily of oxides and hydroxide. Ashes contain a much wider variety of minerals, Phosphate being the most prevalent at just under 50%. So, if this comes across moderately pedantic I apologise but, people should know. Anyway, the basic premise that it is lovely and harmless is the key part for which I agree entirely.

He goes onto explain that sea burials are restricted in Germany with only Naval personal entitled. Which he poo-poos and just says when asked: Was this person in the Navy? (He replies simply) Yes. Good for him I say!

He points out that this is far superior to a rather disturbing aspect of German burial culture: that is if you don’t cough up cash again for the lease on your grave after the initial twenty-year period has expired, then you are put in the ‘trash’ (his words). I think what actually happens is you are put with other remnants of other people in one place – which is still rather sad. So, his point about ashes in the sea being undisturbed stands.

One final aspect is the ceremony part, this is what they do:

“The urn containing the deceased’s remains is then lowered into the water in a net. This is accompanied by music, often by Freddy Quinn, an Austrian singer who enjoys enormous popularity among the post-War generation for his mournful songs about the sea. The mourners then scatter petals onto the waves, the ship circles them three times and then a final farewell is marked with the ship’s fog horn.”

I like that, though being rather dyslexic I read Freddy Quinn as Fred Quimby, the chap being the original Tom and Jerry, and thus was some what relived to find the F Quinn that is was an old Austrian crooner as opposed to a tune that accompanies someone being smashed in the face with a frying pan…

So, Herr Hahn, we salute you…