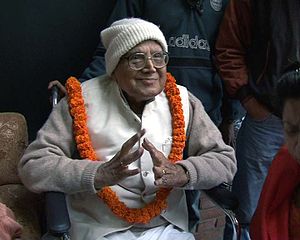 The Nepali Congress has decided to scatter the ashes of their former Prime Minister in every one of the thirteen districts in a thirteen day ritual.

Krishna Prasad Bhattarai, a Hindu, who became Nepal’s first Prime Minister died at the age 87 of after multiple organ failure.

In Nepal that the scattering of ashes is fundamental part of the funeral ritual. What I can’t seem to find out is whether the ashes were all scattered over water.