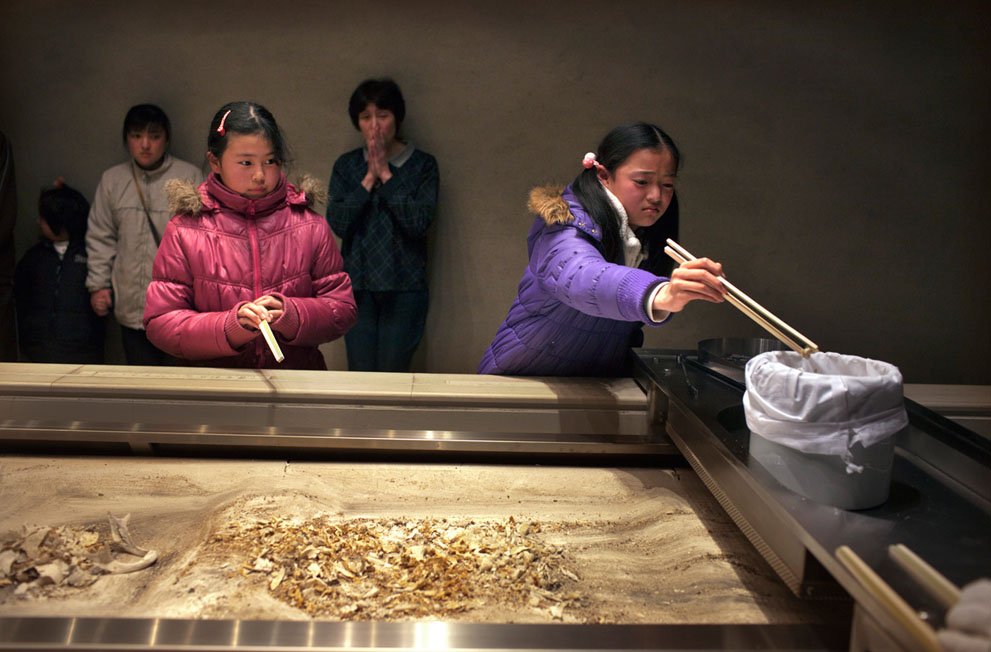 Japanese culture around the collection and burial of cremation ashes is highly ritualised. Shintoism, a ‘religion’ closely associated with Buddhism is observed in Japan and ancestral worship is central to this.

The funeral ritual has twenty stages and there are over 20 procedures, we are mainly interested in two of these: Kotsuage which is the gathering of a person’s ashes, and Bunkotsu the distribution of the ashes.

The ritual starts at the crematoria, the family witnesses the deceased being placed in the crematoria chamber and they are then given an allotted time to return. Once the ashes and have had time to cool the family, two at a time, remove the bone fragments with large chopsticks. They start at the feet moving  upwards and placing the remains in a cremation urn – as they don’t want the person to be upside down. The most sacred and significant bone is the hyoid bone, which is located in the neck – probably due the connection between the brain and the body?

The ashes can be placed in more than one urn, it is not uncommon for the ashes to shared between the family, the temple and even the deceased’s company!

The urn stays at the family at a shrine for 35 days and is then taken to the graveyard, some families take it to the graveyard straight away – it appears to depend on local custom.

Japanese cultural is markedly different to western culture and funerals in both tend to be a high water mark of this, aspects of which each would find the others rather odd. Here is what I find fascinating:

The cremated bones are not reduced in size as they are many western cultures, so the bones that remain large in size after cremation (eg the thigh bone) requires two of the relatives to hold with their chopsticks at the same time (or passing it quickly between each other) sharing one item between two sets of chopsticks is a considered a serious faux pas at any other time as it reminds people of funerals.

Families often have shrines which contain cremated remains of a number of members of the family, these are important to family rituals and are passed down through the family. And if there is no one left for them to be passed onto they are place in the graveyard.

Now one of the more striking differences is Company graves, it is not uncommon for the ashes to be buried at the deceased’s company graveyard, which can even have themed gravestones (eg coffee company gravestones in the shape of a coffee cup!). I know the Japanese and the British have a very different view on work, but I do find this difficult to comprehend, as a Brit I have been imbued with love/hate relationship with my employer, in Japan the employer in held in massive esteem as a provider of wealth – which is better I wonder? What am I saying? I am Brit for goodness sake! Of the course the semi cynical, distrusting, resentful gratitude is a better approach!