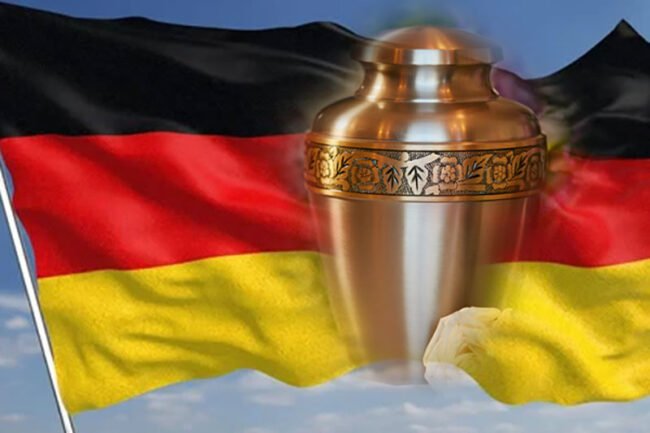 So, it is always interesting to look at what other countries and cultures are up to. Germany is always fascinating – a modern economy, large population, democratic. In many ways similar to the UK but culturally they tend to be a more conservative culture and this has tended true with death culture too.

Now there are two issues where that makes ashes memorialisation different from the start. Firstly, ashes are not allowed to be at home or scattered. Ashes have to be interred at a cemetery or at a woodland burial ground.

Secondly, burial plots aren’t owned they are rented for a period of time 25 to thirty years (which I suppose is the average time span between two generations). Then the grave can be reused – the actual timeframe varies from place to place.

The Germans don’t suffer in the same way as the UK with the land-take / lack of space issue from burial plots. However, with the rise in cremation over the past couple of decades this has lead to its own issues: now cemetery space is not needed and therefore there is a funding issue around maintenance, and people are asking that their cemeteries be supported as cultural space. There seems to be a gentle surge for more liberal attitude around ashes and to some extent this has been heeded – the state of Bremen (a small state near the North Sea coast) allow ashes to be taken home and scattering is permitted too.  There are alternative ways to memorialise – Ashes into Diamonds for example seem to be quite popular with the Swiss memorial diamond maker Algordanza operating across Germany, as this is permitted under German law.

Ashes Water Ceremonies are difficult to access to and quite pricey, the government has sensibly said that this is okay if a biodegradable urn is used but it can be costly so often people use their neighbours the Dutch to do this on their behalf as the cost difference can be quite significant. Sea burials offered by Dutch shipping companies are also much cheaper, the German daily Ostsee-Zeitung said  “A sea burial in the German state of Mecklenburg-Western Pomerania, where Greifswald is located, usually costs more than €1,200 ($1,360). Dutch shipping firms do the job for as little as €400”, the newspaper said.

This was brought to light recently as three urns with all the details were washed up on a German shore, it turns out that they were washed over board by a Dutch company employed to carry out the service – German funeral urns wash up on Dutch coast

It appears that our Teutonic cousins are also starting to embracing memorialisation through football. An article on the Deutsche Welle website  reported that grounds for burying ashes for football fans is on the up, the article centred around the memorial ground at Schalke Football Club a second division team. The site was set up by Ender Ulupinar a former goalkeeper for the team’s amateur squad. He set the cemetery up in 2012 and told the reporter it was just starting to pick up in popularity with a hundred plots either filled or reserved. But this isn’t the first football based memorial ground in Germany, this honour goes to Hamburger Sport-Verein who set theirs up close to the ground in 2008 but as yet has not been that popular a destination for deceased supporters.

One does wonder if the pandemic has shifted the culture, I will be keeping an eye out. One thing I did learn today that a wake in German is called a “Leichenschmaus” literally, corpse feast…..!