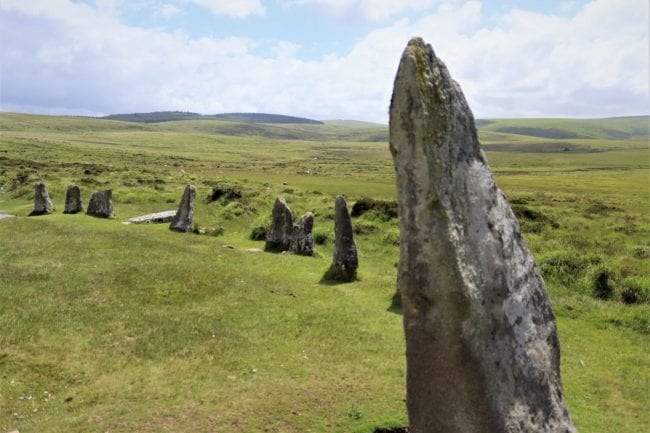 I have been writing about this for years, hundreds of blogs on the subject and attended a few scattering ashes ceremonies, I have seen evidence of where people have scattered ashes – both well and not so well.

However, I had not witnessed one as a third party before. Sunday just gone was the longest day of the year: solstice. And the family and I decided to go on a walk not to far from where we live. The destination was a place called Scorhill Stone Circle up near Chagford on Dartmoor. I am in awe of such places and it had been on my list for a few years and what with it being father’s day the normally reluctant children gave in and agreed to come and visit the ‘boring load of old rocks’ (I am being slightly harsh they don’t mind that much).

We got to the car park in time to be there for solar noon (I am not that much of a hippy but I thought it would be kind of cool), we promptly set off in completely the wrong direction. Nevertheless, the weather got progressively better and we eventually found the route and after a good walk we approached the stone circle.

We could see a couple at one side and a separate group of people the other. As we got closer it was apparent, the group were holding some sort of ceremony, my initial thought was a pagan / druid type gathering. We did not want to disturb them, so we went around the group to the back of the circle for a sit down and drink – it a wonderful setting: high up on the moor near the source of the river Teign.

The group were standing in a circle and moving forward in turn to speak, I did not hear what the were saying as we are giving them privacy. There was as a little wonder as to whether it might be an ashes ceremony. I think we had caught the tail end and after about 5 – 10 minutes the group started to break up. They look at us, their expressions were smiles but also slightly sheepish. As in the they were pleased with what they did but slightly apprehensive too (I might be slightly revising this in my memory – who knows). After a while we got up to go and our route was past where the group had been standing. And yes, there in the grass and reeds was the unmistakable signed of cremation ashes. Not a huge amount, it was definitely not a ‘whole person’ but it was scattered well – lightly distributed around so it would quickly integrate into the soil and the only things left behind was a few small posies of flowers.

It was, or appeared to be lovely. Thoughtful planned, symbolic, and meaningful. My only issue was did the participants feel comfortable with the lack of privacy, I think by their expression not entirely. The organiser may simply have been following instructions. However, if you are organiser or you are leaving last wish consider a location’s use. Father’s Day, a Sunday, solstice, a summers afternoon, a popular spot, lunchtime – none of these factors spells peace and quiet. Having said that, it was great to see and whoever that person was I am sure they would be pleased; I think the people who loved you did you proud.