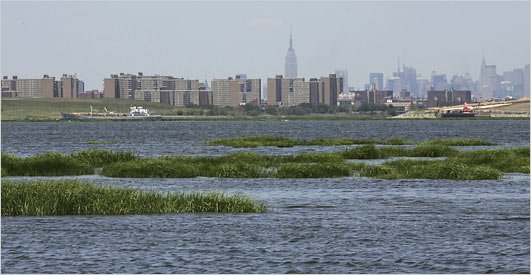 Strange how these things work, my last but one post concerned the fact Hindus living in the UK had adopted local river and as there was a lot of Hindu is the London area they opted for the Thames as a sort new Ganges, then scanning the news I spotted post from the States on almost exactly the same subject.

The article entitled Hindus find a Ganges in New York went onto explain the growing population of Hindus in the Queens district of the city is using the Jamaica Bay area as a focus for their cremation rituals and scattering ashes. However where we seem to have a relatively harmonious union here, there is a some friction over the ritual items that are left and the park rangers don’t seem enamoured by this, considering these items to be refuse.

There has been push with local faith leaders to join park rangers in a cleanup of the beach, as part of a “leave no trace” campaign. Although this don’t seem to have solved the problem.

Interestingly the migrant population is not directly from the Sub Continent they tend to be immigrants from the Caribbean islands and Guyana who have settled in the Richmond Hill area of Queens. They are largely descendants of Indian workers sent to the Caribbean in the 19th century.

It appear that the bay has little flow and that offering left don’t pass out to sea.