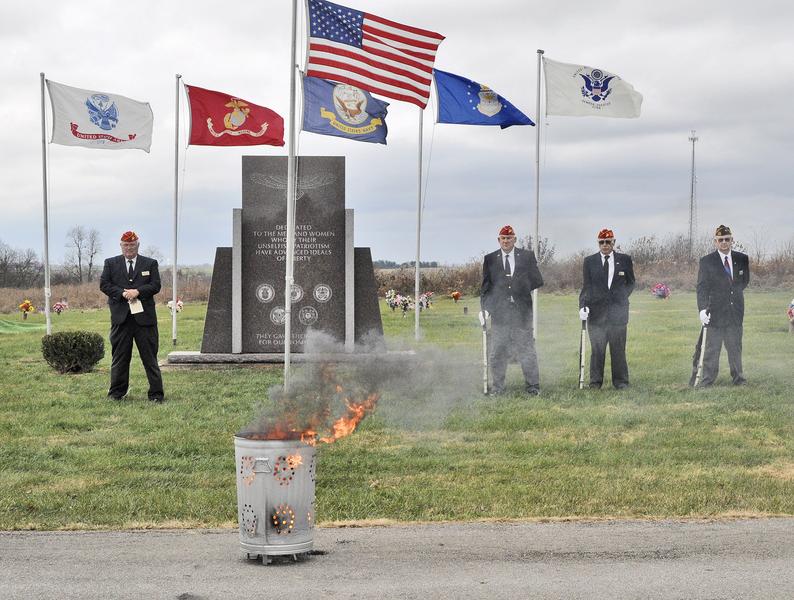 On the blog we discuss many aspects of the cremation ashes ceremony including the dignity and the meaning. This is a story that comes from Richmond, Kentucky USA  and it sparked my thinking on logical extensions from memorialising human ashes to that of a nations symbols – The flags of state and it’s institutions. Before we start I will admit to being a bit of a fan of flags (Vexillology for those wish to know the proper word) as you will see from many of my blog post pictures.

Anyway, here we have veterans’ from the area ‘retiring’ their county’s colours, when they are a bit too worn for display purposes. The veterans, with Brownies and Girl Scout Cadet Troop in attendance, carried out a ceremony to respectfully dispose of the flags. How is that done then, I hear you ask? Well, an honour guard is formed; a volley of shots is fired; a veteran plays “Taps” on a bugle; and then a container holding the old and faded flags is set ablaze, inside a sort of brazier or garden incinerator. The whole procedure is prescribed in a 1942 federal statute.

When the cremation was complete the ashes are to be buried in U.S. Army flag. After the ceremony, each scout who participated was presented a flag ceremony patch or badge.

Flags are truly fascinating (my wife thinks this aspect of my persona is a bit odd). The difference between the reverence in Britain and America is marked. I am sure you could write a dissertation on it, but Brit’s relationship with the Union Jack (yes I know that is the slang term for it) is complex what with it being made up made from three of the four countries in the UK (yes I know the reason for Wales). Whereas in the US it is perhaps more simple, as a younger country, with some good principles (apart from the right the bear arms) and not so much colonial baggage, the fact it is a democratic republic and that one gets a slightly indoctrinated by swearing allegiance to the flag makes it all that bit more important. None the less, the flag is part of being an American, so it is understandable then that such reverence is put into the way they are disposed of, even to the extent of having it defined in statute! To be honest I can’t see this one crossing the channel, the only time you ever see the Union Jack being burnt is when another nation or its people has yet again got cross with the UKs stance on foreign (or even internal) policy and decide to ‘show-off’ in the normal fashion.

On top of the general level of interest two further bits of detail caught my eye, firstly when the ashes are cremated they are buried in a flag – how does that work – what about that flag? The second is there is scout ‘flag ceremony’ badge / patch… which to my mind means both: it is a big deal; and there is a wide number of badge activities.

I could spend hours on this, in fact I may dig out the US statute…