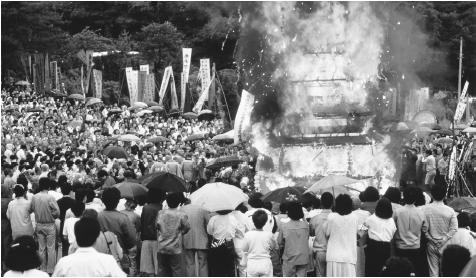 South Korea is going through dramatic changes in funeral tradition and the infrastructure and legislature is only just catching up. Like the UK the popularity of cremations has soared over recent years “Two decades ago, 17.8 percent of those deceased were cremated. Today, those cremated has reached more than 65 percent. A survey by the Korea Institute for Health and Social Affairs showed that 79.3 percent of respondents wished to be cremated after death.”

Memorialisation has changed too, with a most people wishing to have their ashes scattered over the ocean or a mountain rather than kept in an urn at the cemetery.

Korean authorities have been a bit behind the curve only now pushing forward to increase capacity and relax the laws where people can scatter their ashes.

In Seoul there is a least a 50% under capacity. As facilities are hard to find in and around the capital, relatives have to extend the customary three-day funeral period or pay extra to have their deceased loved one cremated in more distant areas.

Tight regulations also prevent the public’s wish to have their ashes returned to nature. It is against Korean environmental maritime laws to scatter cremated ashes in the sea or lakes. Funeral ashes cannot be buried or dispersed near residential, industrial or commercial areas. Building of crematoria in mountainous areas is also restricted by various environmental law.

What is it about this percentage of people wishing to be cremated! It is almost identical to Britain’s! Why? There is very little culturally we share, but this figure or ceiling appears in many places, it seems that there are only very few countries where cremation is higher than this – so is it sociological or physiological thing? Does it relate Westernisation, growing amount of atheism or the ‘World Village’? It seems peculiar to think that if we took anthropology out of the equation four fifths would always opt to be cremated…

Oh yes. The other thing that caught was the concept of mobile crematoria, what mental image does that create? How dignified does that seem?