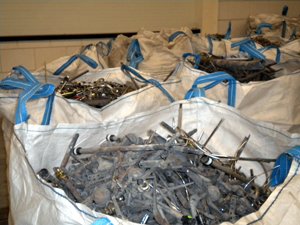 In Japan regulators are looking into the appropriate disposal of cremated ash remains.

Apparently some companies are tendering to dispose of persons cremation ashes for one Yen each (or about 1 pence!). What do they mean don’t people take their ashes back? Well some do and some don’t it would seem bit like in the UK. However it appears to be different from the UK in a couple of ways:

a) firstly the crematoria don’t remove the metals which has lead to the situation where companies dispose of the ashes for very little because of the precious metal they can extract.

b) the article says that ” Normally people’s ashes are melted or ground up, and stored in depositories or buried on the grounds of crematoriums.” …melted?

The article was interesting on an number of other accounts. Firstly it raised the issue the presence of a serious pollutant present in the ash ” [a] chemical reaction in stainless steel platforms on which coffins are placed occurred during the cremation process produces hexavalent chromium and other dangerous chemicals.”

Secondly if companies were making large profits from the precious metal why this would increase the risk of inappropriate disposal of ash?

Lastly a strange moral conundrum for the local authorities, they were vexed by the question of whether they had a right to the value from the precious metal and should they require the income back from the disposer, the argument as we understanding it presents as thus:  “Many local governments, however, remain hesitant to [reclaim the income], saying that using people’s remains as a source of income is difficult when considering the feelings of residents.” . Wouldn’t people prefer that it gets put back into the State’s coffers to build schools rather than increasing profits for private companies?