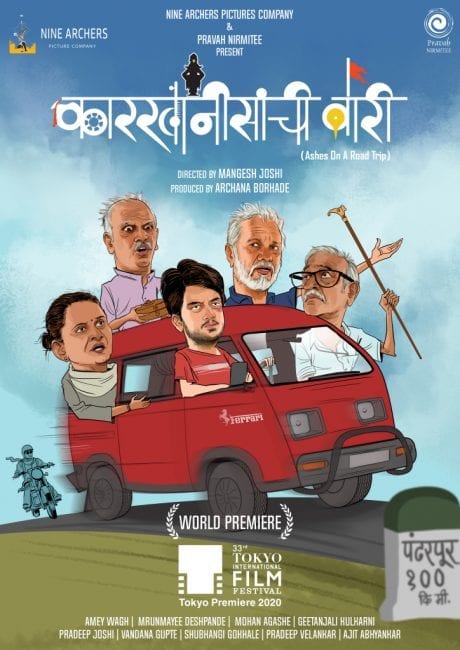 There has not been much in the way of films and film festivals this year, however Tokyo manged to have theirs and there was one entrant from India.

The Karkhanis family is the last joint family in Pune.

When the eldest patriarch in the family passes away, his siblings and his son undertake an eventful journey filled with comical adventures and interpersonal conflicts, from Pune to Pandharpur, in a Maruti Omni, to disperse his ashes as per his final wish.

The son’s pregnant girlfriend, determined to marry him, follows the family Omni on her Royal Enfield, trying to convince the son to marry her.

The patriarch’s wife, compelled to take control of her husband’s finances, takes a sojourn from Pune to Dehu village and unravels a scandalous secret, kept ingeniously hidden for decades.

I have not been able to get hold of the film, only the trailer above. It is good to see such a subject being dealt with, and is similar in subject matter to the Bob Hoskins and Michael Kane film Last Orders

What is interesting is that this is the first Indian / Hindu film like this that I am aware of. Also the deceased’s wishes were too have has ashes split and scattered in three different places:

This is obviously counter to most Hindu traditions, which requires the ashes all be immersed in water.